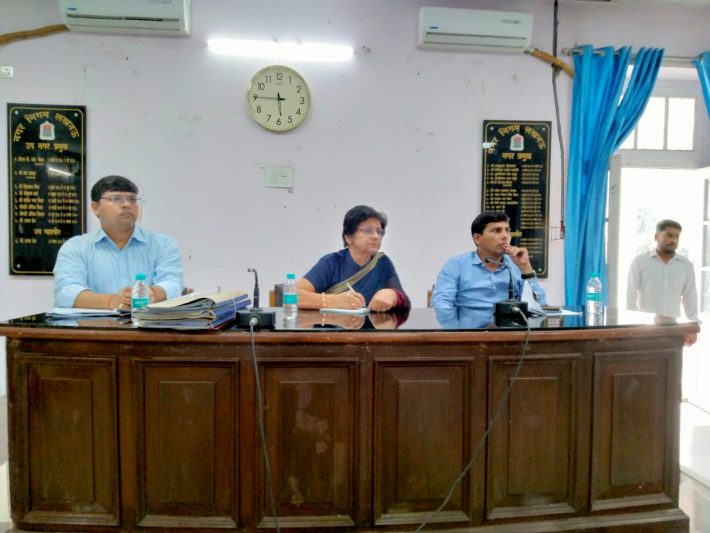 Lucknow: On the arrival of monsoon rains in the city, Mayor Sanyukta Bhatia called a meeting at Triloknath Hall of the Municipal Corporation to conduct a 2-day special cleaning campaign to get all the small drains of the city cleaned and to all the Zonal Sanitary Officers and Sanitation and Food Inspectors for this. Strictly directed.

During the meeting, the Mayor also directed to make a digital diary of zone wise small drain cleaning and also directed to impose roster wise duty of zonal officers for continuous supervision.

During this, the mayor said that the rain has come, cleaning has been done many times, but at this time, if all the drains are cleaned by campaigning, then the public will get a big relief, if the drain is not choked, then the water will come out and there will be no water logging. .

Mayor’s appeal, get the encroachment removed if the drain is choked.

On the instructions of the Mayor, Lucknow Municipal Corporation is conducting a massive campaign to clean the drains/drains of the entire city in view of the upcoming rainy season. Under the campaign, along with cleaning works, intensive supervision is also being done so that the situation of waterlogging/water logging does not arise in any area of ​​the city. In the said campaign, due to illegally constructed permanent ramps/stairs/slabs on many drains/drains, there is a lot of obstruction in the cleaning work, in such a situation there is a possibility of waterlogging due to lack of cleanliness.

Mayor Sanyukta Bhatia directed all the officers to get the drain cleaned completely, along with this the mayor appealed to the public that if any kind of ramp/slab is placed over the drains/ drains in front of the building, then the cleanliness of the city and To save the area around you from waterlogging, immediate removal should be done otherwise such illegal constructions will be demolished during the campaign of Municipal Corporation Lucknow. The mayor also appealed to the public to cooperate.

Additional Municipal Commissioner Pankaj Singh directed all the Zonal Sanitary Officers that during the 2-day campaign, the dignitaries of that area, along with the Hon’ble Councilor, journalist colleagues and other social people, should inspect the cleanliness campaign and make a digital diary by taking its video and photo. , send it to Mr. Mayor also.

U.P Government on road to sprucing up Road Infra

Lucknow: A special Friendship Day and Teej ceremony was organized at Hotel Ranbir’s by a group of 60 women Sakhi