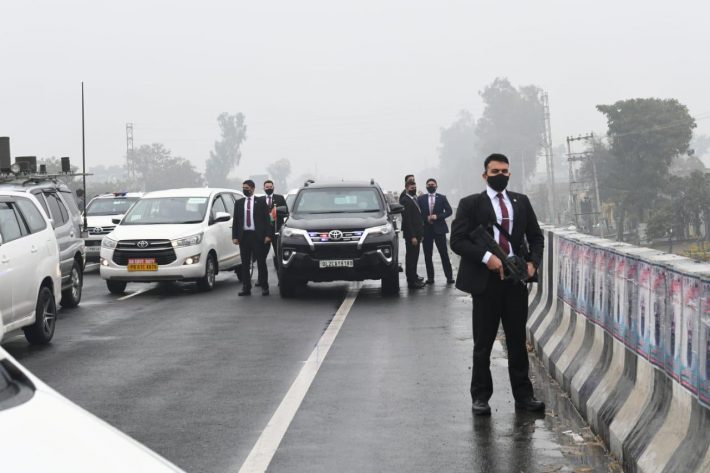 New Delhi: Political parties have been crossing swords over the alleged lapse in the security of Prime Minister Narendra Modi. PM Modi had a rally in Punjab’s Ferozepur, but the Home Ministry said that the Prime Minister could not attend the rally due to a huge security lapse. The Union Home Ministry had said, “Due to bad weather, the PM’s convoy from Bathinda Airport had left for the National Martyrs Memorial at Hussainiwala by road. When Prime Minister Modi’s convoy reached a flyover, about 30 km from the martyr memorial, it was found that some protesters had blocked the road. The head of state was stuck on the flyover for 15 to 20 minutes. This was a big lapse in PM Modi’s security.

Punjab Chief Minister Charanjit Singh Channi said in a press conference that there was no threat to the security of the Prime Minister. The Punjab government had no role in this.

Channi said, “There was a call from the Home Minister. He said something went wrong there and the Prime Minister is coming back. I said there was no mistake on my part.”

In the matter of lapse in the security of Prime Minister Narendra Modi, the Ministry of Home Affairs formed an inquiry committee, the central government said – it will take strict steps.

Channi said that all arrangements were made for the security of the Prime Minister. Taking an aggressive stance, the BJP has termed it as a ‘bloody intention’ of the Congress.

On the other hand, Congress has said that the chairs were empty in the rally, so the Prime Minister decided to go back under the pretext of security.

The BJP says that there is a Congress government in Punjab and it was their responsibility for the security of the Prime Minister’s visit.

Experts give their blunt view

Experts believe that it was a security lapse. They say that it could have been dangerous for the PM to be stuck in one place for 20 minutes. Especially when that area was only ten kilometers away from the Pakistan border.

Reportedly the state government is informed before the PM’s visit and every complete preparation is done from the point of view of the Prime Minister’s security. There is however a call for restraint until  the investigation report comes.

The Special Security Group or Special Protection Team was established in the year 1985 with the objective of providing security to the Prime Minister, the former Prime Minister and his immediate family members. The SPG was formed in 1988, a few years after the assassination of Indira Gandhi in 1984. The annual budget of SPG is more than Rs 375 crore and it is considered to be the most expensive and robust security system in the country.

Union Minister and BJP leader Smriti Irani also held a press conference in this matter. Smriti Irani raised many questions. “Prime Minister’s life was put at risk and Punjab Police remained a mute spectator,” she alleged. Smriti Irani alleged, “The bloody intentions of the Congress failed. We have said many times that Congress hates Modi but do not calculate with the Prime Minister of India. Congress will have to answer today.”

Union Minister Smriti Irani further said, “Was the PM’s security squad deliberately lied? There was an attempt to stop the entire convoy of PM, PM’s security was breached for 20 minutes, who took those people there.”

Responding to the allegations regarding security lapse in the Prime Minister’s visit, Congress spokesperson Randeep Singh Surjewala said that the Prime Minister belongs to everyone and there should be no politics on this matter. The Home Ministry has sought a detailed report in this regard from the Punjab government.

• IED was used by terrorists at a meeting ground in Patna where Narendra Modi was to address a meeting on 27th October 2013.Five people were killed and 66 injured in the serial blasts.
• Two prime ministers, Indira Gandhi and Rajiv Gandhi had been assassinated. Indira was assassinated while in office, Rajiv was assassinated after his tenure.

• India’s first Prime Minister Jawaharlal Nehru faced assassination attempts many times. He faced an assassination attempt in 1947 while he was visiting the North-West Frontier Province in a car. Attempt to bomb Bombay–Amritsar Express on 4 May 1953 in which Nehru was travelling. Later a failed bombing on 30 September 1961 on train tracks in Maharashtra.

Doctors at KGMU now just an SMS away