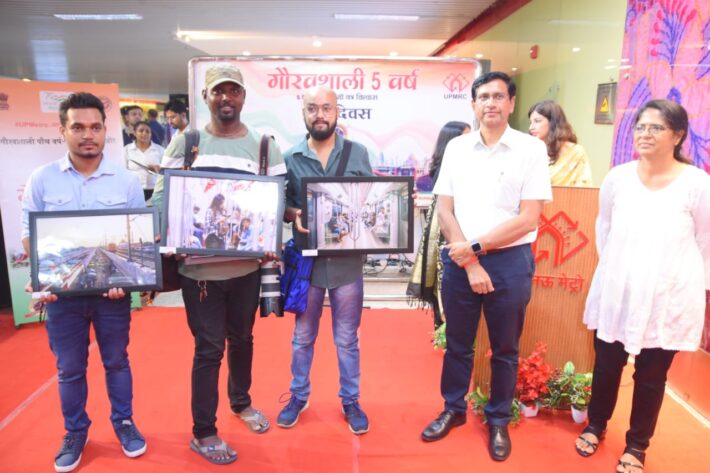 Lucknow: Lucknow Metro  completed 5 successful years of commencement of metro services in Lucknow and to commemorate this accomplishment of inception of metro operations on 5th September, 2017; Metro Diwas 2022 was organised at Metro Depot, Transport Nagar in which all the UPMRC officials and employees participated with vigour & enthusiasm to celebrate this momentous occasion.

On this occasion  Sushil Kumar, MD, UPMRC said, “I congratulate the entire team of UPMRC, general consultants & contractors on these 5 glorious of accomplishments. During this journey we have overcome many challenges with our determination & hardwork. Lucknow Metro team with its firm resolve to provide world class services to the people has managed to achieve the ridership of 72,800. Lucknow Metro has achieved the fastest recovery rate of ridership post Covid- 19. Uttar Pradesh Chief Minister, Yogi Aditya Nath has recently made official announcement for the development of second phase of Lucknow Metro.

UPMRC has the legacy of achieving the targets within the stipulated timelines. I am confident that our team is going to achieve the same feat for the upcoming phase of Lucknow Metro i.e Charbagh to Vasantkunj.
The priority phase of Kanpur Metro is already operational. The commencement of metro operations in Kanpur has decongested the city and changed the lives of the people. It is providing safe, secure and comfortable travel experience to the people.

Agra Metro Project is our dream projects which will make mass transit more convenient and safe for the public in the long run by providing smart mobility. The construction of Agra Metro project is also in full swing and will be completed before the scheduled deadline. Like Lucknow Metro and Kanpur Metro; we will put our best efforts to achieve new milestones in Agra too.”

On the occasion of Metro Diwas 2022 a prize distribution ceremony was held in which MD UPMRC Shri Sushil Kumar felicitated best performing employees for their outstanding contribution in various fields. MD’s Gold and MD’s Silver medals were awarded to these employees recognising their achievements associated with the Metro Project, Metro Operations & Metro Maintenance categories.

Moreover, the best kept and maintained Metro station award was awarded to Vishwavidalya Metro Station for the year 2021-22.

After this event, 5.00 croreth passenger – Mrs Anamika Verma, along with top 3 highest recharge value GoSmart card users namely Ms. Shivani Singh(First Prize), Mr.Rajan Valmiki(Second Prize) and Mr.Vivek Srivastava(Third Prize) were honoured by Managing Director at the station. Besides this, the top three winners of the photography exhibition namely were Shri Yuvraj Shukla(First Prize), Shri Sunil Raidas(Second Prize) and Shri Lakshya Saini(Third Prize). All these photographers showcased the photographs on the ‘Lucknow Metro’ .
The handicrafts exhibition by Kalakriti Bazaar, and music band performance was also organized for the commuters at Hazratganj Metro station from 1:30 pm onwards for their recreation and entertainment.

• The lucknow metro services commenced on on the 8.5 km long the Priority Corridor from ‘Transport Nagar to Charbagh’ on 5th September, 2017.

• The metro operations on the entire 23 km North-South corridor from ‘CCS Airport to Munshipulia’ of Lucknow Metro began on 8th March, 2019 in just 4 yrs 6 months, 36 days ahead of stipulated deadline which is record in itself.

• The Kanpur Metro project was inaugurated on video conferencing on by Hon’ble PM, Shri Narendra Modi on 15th September, 2019.

• The trial run of Kanpur Metro’s 8 km long Priority Corridor from ‘IIT Kanpur to Motijheel’ began on 10 November, 2021 which was the fastest construction bettering the record of Lucknow Metro.

• Lucknow Metro was also registered in the Limca Book of Records for the fastest construction of underground station of CCS Airport in just 19 months 10 days.

UPMRC VISION IN NEXT 3 YEARS

• Similarly, Agra Metro’s 6 km long Priority Corridor from ‘Taj East Gate to Jama Masjid’ will be completed by end of 2023 and will become operational in 2024.

• The metro projects in other cities of Uttar Pradesh like Metrolite in Gorakhpur, Varanasi, Jhansi, Meerut and Prayagraj will soon become a reality

• The operations of Kanpur Metro started in a record time 2 yrs 1.5 months 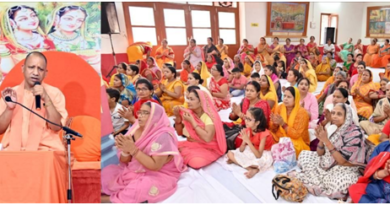 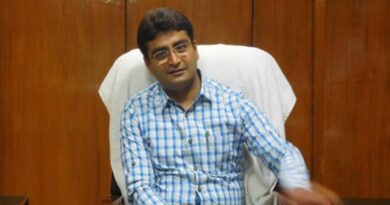