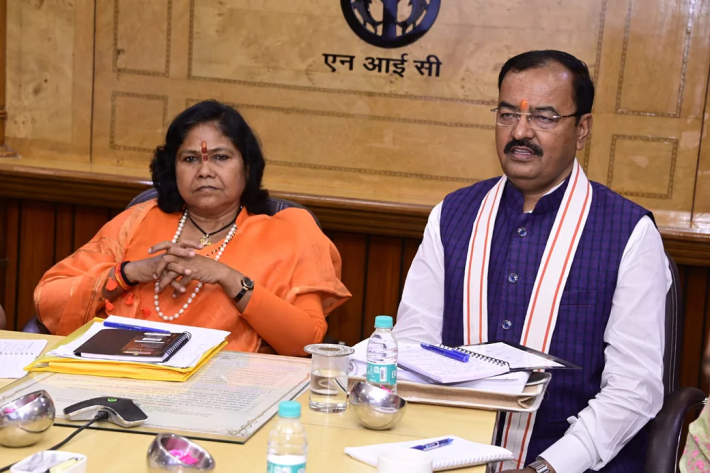 Lucknow: Minister of State, Ministry of Rural Development, Consumer Food and Public Distribution, Government of India, Sadhvi Niranjan Jyoti said that according to the vision and goal of the Prime Minister, in collaboration with the Ministry of Rural Development, 5 other Ministries and State Governments, more than 50,000 Amrit Sarovars have been constructed in the country.

This scheme will have far-reaching results. Sadhvi Niranjan Jyoti was presiding over a virtual meeting organized in this regard with the District Officers and Chief Development Officers of Uttar Pradesh at Yojna Bhawan. She said that District Magistrate, Block wise and district should convene a meeting in this regard and meeting of Block Wise Heads should also be held and this plan should be materialized, maximum public participation should be ensured in this and work should be done with full team spirit.

This Amrit Sarovar should prove to be a boon not only for providing water to the village but also for recharging the water, such concrete and effective efforts should be made for this purpose. Standards and guidelines have been set, their compliance should also be ensured. The sewerage water of the village will not go into these ponds at all.

She said that they would be named after the martyrs and arrangements would be made to hoist the flag here on 15th August in a festive-like atmosphere. It would develop into a model pond and would prove to be an inspiration for the coming generation. Said that all the districts Officers should play their leading role in giving concrete shape to this plan and should also get due information about their action plan from the respective website and app.

These will be initiated by freedom fighters or their family members or Padma awardees. This Amrit Sarovar will become a model in the form of swimming pool and tourism. Said that it would be his endeavor to appoint a woman as Amrit Sakhi to take care of them. The Deputy Chief Minister gave instructions to make arrangements for platform, community building, tree plantation, community toilet etc. near Amrit Sarovar as per rules. He said about 5600 Amrit Sarovaros will be constructed in 80 Lok Sabha constituencies of the state. Accepting this challenge, all the concerned officers should do so with full capacity to show that the name of Uttar Pradesh remains paramount in this matter in the country.

He said that it is of national importance. This plan of the project is to be operated with full dynamism and efforts should be made to complete a large amount of work in it by 15th August 2022. Shri Maurya said that no hesitation should be taken in making its DPR. These lakes should be developed like a swimming pool, in such a way that people can swim in it and move forward. Said that public participation should be ensured in their construction and this work should be done as a public movement. He said that efforts should also be made to deploy a woman in the form of Amrit Sakhi to take care of her, so that she can also get employment. He said that development works should be done at a fast pace. be.

A big platform should be built there, a big board should be put up, efforts should be made to build community halls and toilets there so that they would also prove useful for holding the procession in the village. He expressed the hope that the officers would complete it on time by working diligently. Said that trees of Peepal, Neem, Banyan, Jamun etc. should be planted near these lakes. The soil which will come out from these ponds will be used by the Gram Panchayat. First of all, its action plan will be prepared from the village level. It should be closely monitored at every level and all the photographs of starting, during and ending work will be displayed there. The officers will go to the work site at any cost. Along with drinking water, these lakes should be made useful for water recharging. Said that the work of documentation of Amrit Sarovar should be done very well. Arrangements should be ensured to do its documentation at the national, state and district level as well as at the block level. Nectar

The guidelines and practical aspects should be taken into account in the site selection of lakes.

There should be a provision of link road for people to go to these lakes. He said that every penny should be utilized properly in their construction. He said that for their construction, we should aim for the flag hoisting here on August 15, 2022. Although this plan has to be completed by August 15, 2023, but by August 15, 2022, efforts should be made to do more and more work in it. Every effort should be made to arrange funds for beautification here as well. It should be developed as a tourist area. While preparing the project, the practical problems of the village have to be seen. Said that according to the resolve of the Prime Minister, they have to be given shape. The size of the ponds under the Amrit Sarovar Mission will be 1 acre. MNREGA, Panchayati Raj Namami Gange, Revenue, Minor Irrigation, Forest Environment, Cultural Department

A pond will have 10000 cubic meter water holding capacity. About how the site will be selected, the selection will be done on the basis of the prescribed guidelines and ground reality. These ponds will be started by the hands of freedom fighters or their family members or Padma awardees. People can also donate labor in making them. Panchayats will also be honored after the construction of the lakes.

Additional Chief Secretary Rural Development, Panchayati Raj and Revenue Manoj Kumar Singh said that the guidelines regarding the construction of Amrit Sarovar are being sent to the districts soon. He said that all the guidelines and related websites should be studied. All the District Magistrates and Chief Development Officers should do it very seriously. Dharamveer Jhan, Director, Ministry of Rural Development, Government of India gave point-wise information about the guidelines issued regarding the construction of Amrit Sarovars.

Flaunting babybumps is the new sexy for Bollywood beauties