Neither did she get her mother’s caring nor did she get to play on her father’s lap. Hers was a life spent at the orphanage. Feeling the burden of giving birth to a girl child, all that her parents could do was to dump the newborn child to suffer. Shunned by all at birth, today she has managed to carve a niche for herself. From a stranger taking the baby girl to an orphanage, now started a new journey towards a slightly better and happier life. The orphanage proved to be a stepping stone for her success story. Aspiring to be an armyperson some physical issues came in her way. Hiccups aside, she did not give up her dream. Aiming for the sky, she enrolled in nursing and is now trying to realize the dream of joining the army. The girl who has now fast become a talk of the town is Manju Pal, a nursing student of SRMS Medical College, raised in an orphanage.

Manju speaking to reporters said that, “I was thrown on the road by my own people when I was just two days old. I didn’t see my parents, maybe that’s why I never felt the lack of them. The people in the orphanage are my family. Here I am not alone, but everyone is just like me. We all support each other. ‘

Manju is studying nursing. What was the main reason for choosing this area? On asking, she says, “I wanted to be a part of the army but it was not possible due to my low height. That’s why I chose the medical line. I now want to fulfill my dream of joining the army through nursing. ‘

When asked about her journey, she says, “I was fond of reading since childhood. I passed high school with 77 percent marks and then 12th with 75 percent marks from Sasni Gurukul of Hathras. After this, I was admitted to SRMS by the orphanage. This is my second year in nursing. Now I study diligently so that I can fulfill my dream and do something for the society. ‘

The journey of Manju’s struggle began 18 years ago. In 2002, when she was just two days, a man named Mahesh Pal brought her to the Arya Samaj orphanage. Mahesh found her lying on the road. Did not say where she was found. Harshvardhan, the head of the orphanage, says, “The warden of the orphanage named the innocent girl of two days Manju. When Manju grew up, she was told that a person named Mahesh Pal had brought her here. Since then Manju started writing Pal with her name. ‘

Harshvardhan, the head of the orphanage, said that when Manju talked about creating a future in medicine, the orphanage’s panel met Devamurthy, president of the SRMS Trust. She told Devamurthy that the girl wanted to enroll in nursing. The nursing fees in the college was two lakh 80 thousand rupees. When the panel expressed its inability to pay the fees, the matter of Manju’s admission for Rs 15,000 was decided. The institute also promised to give jobs to Manju after the completion of the course. For this, Devamurthy put a condition that till he takes all the money for Manju’s education, then Rs.5000 per month will be deducted from his salary. Everyone agreed on this matter and Manju got admission. 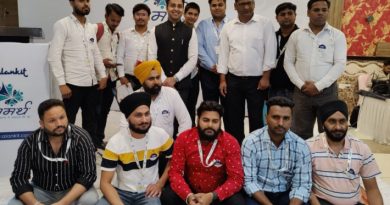 Samarth 2022′ Take Your Journey, Join the CSP Movement with Alankit