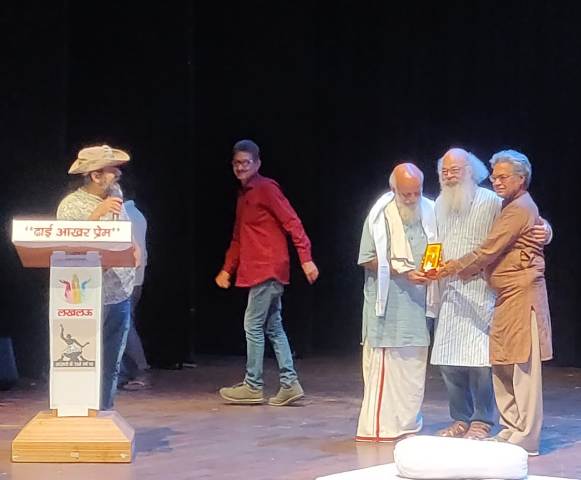 Lucknow: The National Cultural Tour “Dhai Akhar Prem”, running on the initiative of Bharatiya Jana Natya Sangh (IPTA), reached Lucknow on the evening of 12 May. The yatra started from Raipur on April 9, the birthday of Rahul Sankrityayan, and will end on May 22 by reaching Indore.

On behalf of the organizing board, Deepak Kabir told that in Uttar Pradesh, the yatra has reached Lucknow via Banaras, Ghazipur, Azamgarh and Ayodhya.

When the Yatra reached Lucknow, there was an atmosphere of enthusiasm in the city since evening. Enlightened citizens of the city, litterateurs, artists etc. all gathered at Bharatendu Natya Akademi and welcomed this group of more than 25 people coming from Ayodhya under the leadership of Rakesh Veda with garlands.

In Bharatendu Natya Akademi, all the comrades sang a song together and the song was presented by IPTA. After this Yashpal, Uday Khatri, Naish Hasan, Prasanna, Shankar Lal Katiyar were honored at the hands of Meena, Rokhke Verma, Surya Mohan Kulshrestha and Virendra.

Prakash Veda on behalf of the travel delegation shared some thoughts and travel experiences. A play by The Mocking Birds was presented on this occasion. Bhartendu Kashyap wrote and directed this play ‘Shikar Baaki Hai’. Pooja, Bhargavi, Mahima, Abhijeet, Aman, Shrestha etc. lived their roles brilliantly in this play. Music was by Mahendra Pal and lyrics were penned by Lucky and Aman. On this occasion Pradeep presented Ghazal of Habib Jalib.

The political legacy of Kaifi Azmi and some anecdotes from his life were narrated by the city’s famous anecdote Himanshu Bajpai in Dastan-e Kaifi. The audience appreciated all these programs very much.

The events held on the evening of May 12 at Bhartendu Natya Academy include IPTA, Sajhi Duniya, Dastak Manch, Earth, Amit, Nipa with Prales, Jales, Dales, Jan Cultural Manch, Jan Natya Manch etc. Now this journey will proceed towards Kanpur via Unnao. It has to reach Indore on 22 May.

176 cops martyred on the line of Corona duty, over 21,000 suffered infection

Abandoned by parents at birth, today she soars like a bird