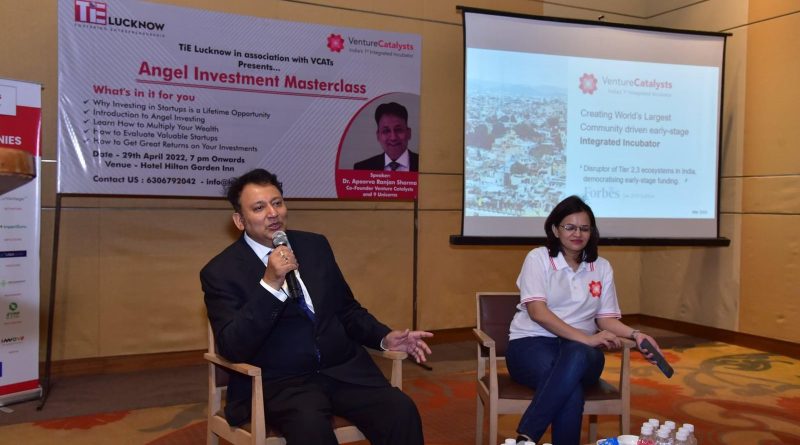 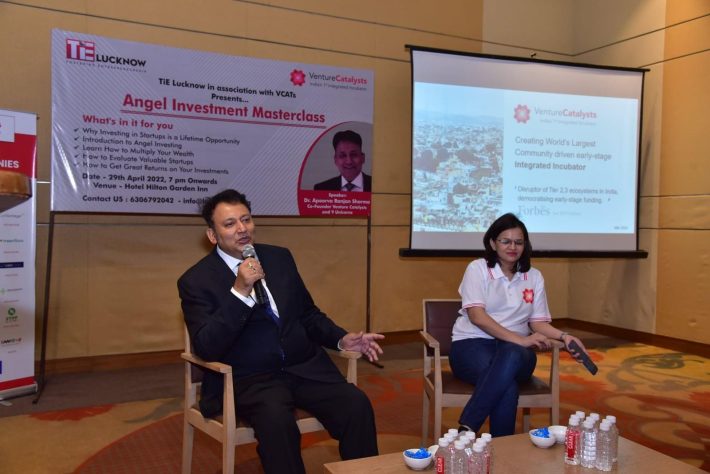 Lucknow: Dr. Apoorva Ranjan Sharma, Founder Venture Catalysts, 9UNICORNS Angel Fund. is known as the founding father of startup ecosystem in India. He shared his knowledge and expertise on the subject at an Angel Investment Masterclass exclusively for the people of Lucknow at Hotel Hilton Garden Inn Gomti Nagar, Lucknow.

The idea behind having such a Masterclass in the city was to spread awareness about Angel Investing in the city and make people aware about the modern day startup culture which is fast catching the fancy of the country.

The event was organized by Venture Catalysts and TiE Lucknow. Over past 30 years pan India there are 20 chapters of TiE in all metros in the country and other cities. The top 200 performers have been funded by the TiE network.

Speaking at length at the Masterclass, Dr. Apoorva Ranjan Sharma said it has always been a pleasure to interact with those who want to understand the nuances behind Angel Investing. He said good startups are coming from UP. He elucidated that this asset class of startup investment is becoming even more unique. Dr. Sharma said India is a land of unicorns and in the past 7 to 8 years this area has gained much prominence. Explaining the importance of this particular class of people he said today 96 unicorns exist in India total worth of 10 billion US dollars. He said six unicorns are in our portfolio. In the last 2 years majority of unicorns happened due to the pandemic explaining there was better digital penetration and hence with use of digital platforms there was lot of money that went to Indian unicorns instead of the Chinese.

Dr. Sharma said that start-ups have done well at the stock market. Being an important asset class one should understand that India has become third largest startup economy with total unicorns at 948. India has 96 and 72 of them are in Indian diaspora which takes it to a total of 180 Unicorns. This shows the capability of Indians is much much higher and you will also find Sunicorns.

In India there are total of 6000 accredited investors the net worth of each Angel investors is about 1 crore. Angel Investors have an angel fund structure regulated by SEBI. There are 2200 Angel Investors majority are part of Vcats. 700 actively investing in start-ups. Of the 1,50,000 startups which are part of the economy 1,20,000 are new startups and growth of startup is high.

Dr Sharma said, “In 7 years, the focus has shifted towards the startup ecosystem with what we call the seed fund. there are other initiatives like Samridhi which are only adding to the story. There are 22 accelerators in all which are ready to pump in money and there is serious interest in boosting the ecosystem. Total 400 billion dollars is the evaluation of start-ups. 1 out of every 10 Unicorns are coming out of India and majority of them 82 are unfunded. Fintech is quite a hot sector.”

He said, “1200 VCs are globally investing in India covering a diverse range of 1,20,000 startups. Indian stock markets have started investment in startups this comprises of both the early stage investors and 22 of which are at a growth stage. Investments are happening based on how future ready you are, agility and how focused the startup is.”
So where does one draw the line?, Dr. Sharma said, “there is no point going overboard just because you have money. Learn and start low. Nobody takes the responsibility if the venture fails hence you need to be careful. Invest in ideas more than just money. Angel investment is not about quantum, one must have the ability to help in building start-ups. 80 to 90% of the startups generally fail. Have an intelligent plan and work with the community there is a lot to learn from each other in India. Principally if you give a Startup 3 years it should reap rich dividend if you play your cards right. In 10% cases the company dies out due to co founder conflict. Patience is key. It is also important that you do value addition and not just run after money. We can provide support if a startup does good and structuring issues are taken care of. Be open to evaluating constantly, learn from experience but too much learning can be hazardous.”

He cautions, “In short spend your money on a money making venture. 30 to 40% deals evaluation according to liking of startup founders. Capability matters. Will he or she be able to run the business, enterprising people and raising capital matters with good sales. In every category those who raise money in a year they go ahead. When someone runs after an idea he is ready to sacrifice big time and has a conviction behind it. It is sure to succeed. VCs generally help people as investors when nobody is ready to help. In other words you helping in building the economy.”

As a proud Godfather of start-ups, he adds, “Nearly 1 lakh jobs have been provided by the startups that have been set up by Venture Catalysts. 1 trillion dollar economy as envisaged by the government will not happen by manufacturing. A startup must have the capacity and willingness. Only invest in those with a startup mindset. Your focus will have to be value addition. You will have to give time and support. Ultimately Angel investing is about looking for Dreamers with passion and good talkers but at the same time those who deliver. There should be no difference in words and action. Startup Sourcing should be strong and then there has to be due diligence. As an investor you will have to take a winning bet and be able to experience change in two to three years time when your hard work converts into mature results. Be part of an Angel network community so that you have deal flow access. I will support you help you in incubation, training and for the growth and democratization. ”

Sachin Sahni President of TiE lucknow said, “that the subject of startup investing as an asset class is gaining much traction in society today and  post Shark Tank there is a lot of interest in how investment happens in the startup sector.  TiE is known as the Indus Entrepreneurs. It is the world’s largest network of not for profit startups whose headquarter lies in the Silicon Valley.”

Poonam Khandelwal of VCats said, “the event is designed in a structured manner connecting people with the right advice on whatever they need.  Apoorva in these 30 years has worked rigorously to build up the startup ecosystem in the country. Incubation is a buzzword and now with Shark Tank it has become a dinner table conversation. The idea behind Venture Catalysts has been to educate Modern Day Angel Investors of Tier 2 and tier 3 cities.”

When asked about local guidance for startups in UP, it was advised to angel investors by VCats, that “Aspiring startup investors can easily connect and coordinate with Sudhanshu Rastogi, a senior startup investor, who is also a UP venture partner in VCats.” Besides, he is also a Charter Member of TiE Lucknow, which happens be a US based network of mentors, investors and start-ups. 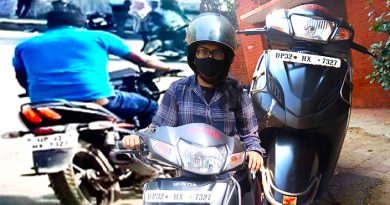 Girl faces challan in Lucknow for no mistake of her own, is the police establishment watching? 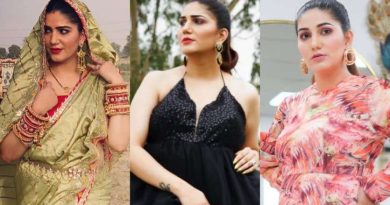 Sapna Chaudhary puzzles all with ‘Taking a break’ message on Insta