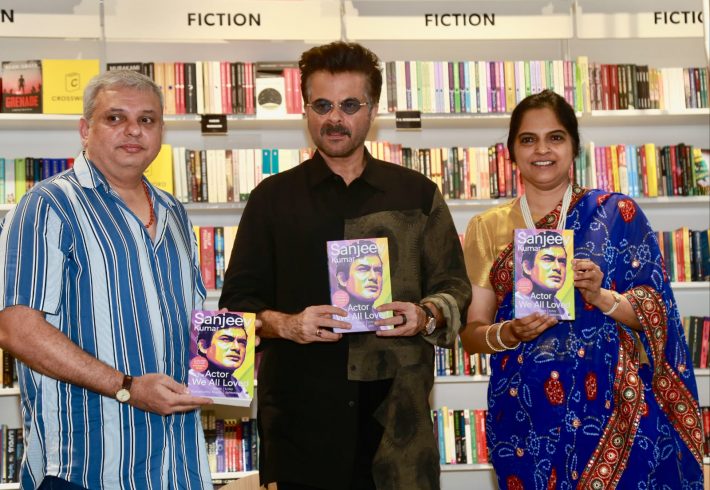 ’He was a natural; one of the most powerful actors.’ —Narendra Modi, Prime Minister of India, 2014-present day

When Oscar winning filmmaker Satyajit Ray decided to make his first Hindi film- he wanted to cast two people- Sir. Richard Attenborough and Sanjeev Kumar. Ray’s 1977 film titled ‘The Chess players’ is set in 19th century Lucknow. Two lazy noblemen are foolishly obsessed with chess even as the British want to usurp their territory. Such was the power of Sanjeev Kumar and Saeed Jaffrey’s performance and Ray’s direction, that the film became India’s official entry to the 51st Academy Awards for best Foreign Language Film.

The film was received and reviewed globally. It is one of the ‘Forty Films that Martin Scorsese wants you to see.’ In 1989, Faber London published a book ‘The Chess Players and Other Screenplays.” On the cover of the book are Sanjeev Kumar and co-actor Saeed Jaffrey. Sanjeev Kumar is an actor who shone across genres- comedy, tragedy, romance and drama. His films remain eternal favourites of ardent cinema loves across the world.

Sanjeev Kumar was one of the most powerful actors of the 1970s – the golden era of Hindi cinema.He was every director’s fail-safe artiste. When he entered the frame, the audience would sigh with relief, ‘Nothing can go wrong now!’

Reeta Ramamurthy Gupta and Uday Jariwala have co-authored this very important biography of historical significance in the annals of Indian cinema. The book traverses his life from 1938 to 1985 and promises to be a thorough entertainer.

It takes us through Sanjeev Kumar’s journey to becoming one of the greatest actors Bollywood has seen, with personal essays by his friends and leading Bollywood names including Gulzar, Randhir Kapoor, and co-stars Sharmila Tagore, Moushmi Chatterjee, Tanuja, among others.

Sanjeev Kumar was the antithesis of the typical Bollywood hero doing romance and action. Not one to crave glamorous roles, he was more interested in versatility. From his mature roles in films like Mausam and Aandhi (banned by the Indian Government during the emergency), to his comic timing in Angoor or the angst of person with disabilities in Koshish—he was truly a thinking man’s actor. His expressive face, inflections and pauses, natural ease for lip-syncing, all of it made him the complete package.

Commenting on her experience of narrating Sanjeev Kumar’s life story, co-author Reeta Ramamurthy Gupta comments ‘It took me four years, multiple interviews with over 25 contributors, poring over 800 magazine articles in five languages to write this book. Sanjeev Kumar was one of those rare performers who ‘became the character’, instead of playing it and his National Awards prove it. The book chronicles his rags-to-riches story, his motivations, his fears and his God-gifted talent. Readers will feel that they are in the same room as Sanjeev Kumar- understanding his life firsthand. It is an entertaining read and a prep for aspiring actors, all at once.”

“We must all celebrate 9th July, Sanjeev Kumar’s birthday. All of us actors are inspired by him, especially the realistic acting which sanjeev Kumar bought to the theater and to indian cinema. He was indeed Master of his Craft and a treat for all senses. What he has achieved in a short span of his career -I have no words to express. This book by Reeta Ramamurthy Gupta will bring his movies alive again. Lovers of cinema will always remember each and every performance of his. He is the reason I’m here and then reason We could produced Hum paanch & I could act in Woh Saath Din.” Says bollywood actor Anil Kapoor

Co-author Uday Jariwala says, “I still remember that for a very long time after Sanjeev dada’s demise, every time the door opened, I thought it was him entering the house. He would cuddle me and play with me. He left a vacuum in our lives that we can never fill. My family and I are excited to present Sanjeev Kumar: The Actor We All Loved. This book is a labour of love and it has taken us almost four years to complete. It is an authentic representation of his life. For the first time, his fans will get to know him up close as he really was.”

Reeta Ramamurthy Gupta is a prolific biographer, reviewer for CNBC TV18, and a bibliophile. She is credited with the acclaimed Red Dot Experiment, a ten-year-long and six-nation study on how culture impacts communication. A polyglot, she speaks five languages. This is Reeta’s third book. In 2018, she wrote ‘Rescript Your Life’, a self-help autobiographical narrative and in 2021, she wrote ‘The Stranger In the Mirror’ the biography of BAFTA nominated film-maker Rakeysh Omprakash Mehra.

Uday Jariwala is the nephew and heir to the legacy of Sanjeev Kumar. He runs the Sanjeev Kumar Foundation, an NGO that works towards the promotion of theatre, art and education. He is a businessman and lives in Mumbai with his wife Neelam and their two children, Aryan and Saachi

The world of Competition and Comparisons