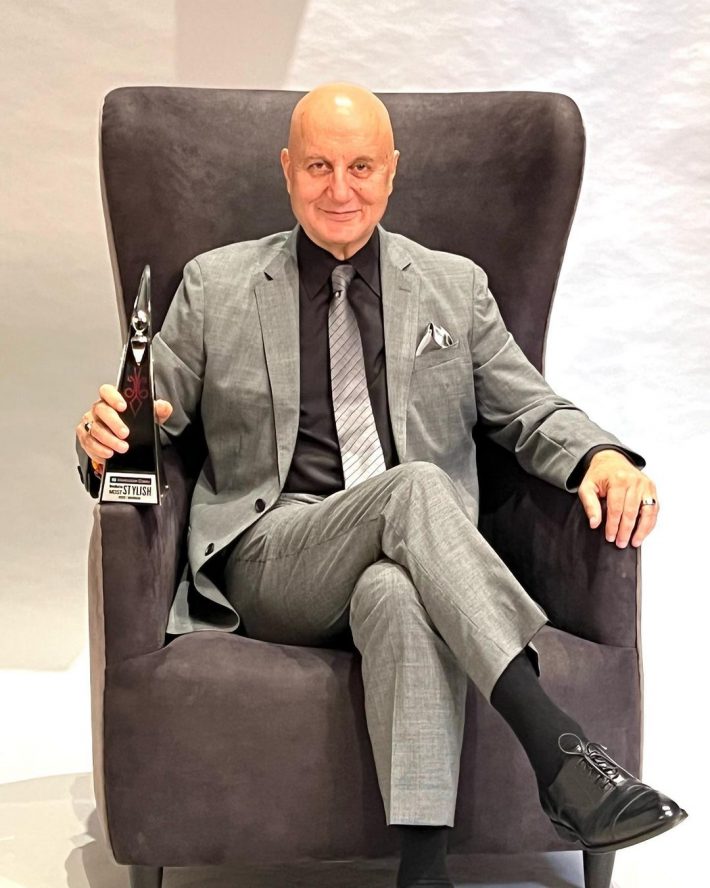 Mumbai: Anupam Kher had an amazing start to 2022 as he starred in one of the most successful Bollywood films of all time, The Kashmir Files. Emerging as the highest grossing actor of the first half of 2022, the actor received rave reviews for his performance in the film that is expected to receive laurels in the upcoming award season.

However, it seems to have started already for the actor as Kher was honoured last night at the HT India’s Most Stylish Awards with the HT India’s Most Stylish Master of Reinvention award. The actor, who has had everyone in awe with his dedication to fitness visible on his social media, received the trophy from his close friend and industry veteran Satish Kaushik, and his thank you speech was just a perfect example of his hilarious personality.

The actor started his speech with a joke on both him and Kaushik as he quipped, “Mera chaand poornima ka hai, iska amavas ka hai.” Kher then went on to show some more of his wit and humour as he said that even though he has won numerous awards in his 38 years and running career, there is still one award that he isn’t ready to accept yet. “Ek award dene ke liye pichle 2-3 saal se peeche pade hue hain, magar main agle 25 saal tak wo lene nahi wala, wo hai Lifetime Achievement Award,” he joked. The actor went on to quip that the HT Style Awards had been running for 10 years and he was wondering why he wasn’t getting one. He joked that he even made his physique for it.

Kher went on to define style saying, “Style has something to do what you are comfortable with. How you look, how you talk is the later part. Most important thing is that I am comfortable looking like this and we are comfortable with who we are for the last 43 years and we continue to do that.” He insisted that he isn’t a legend yet but a young star.

Even after having been in the industry for close to four decades, Kher has the energy and enthusiasm of any newcomer, and the way he has transformed himself physically, it has been an inspiration. Work wise, after the humongous success of The Kashmir Files, Kher has some interesting projects in the pipeline, including Sooraj Barjatya’s Uunchai with Amitabh Bachchan, Boman Irani, Neena Gupta and Parineeti Chopra, Sankalp Reddy’s IB 71 with Vidyut Jammwal and Kaagaz 2 with Darshan Kumaar and Satish Kaushik.

Vidyut Jammwal extends a donation for the future of Kalaripayattu