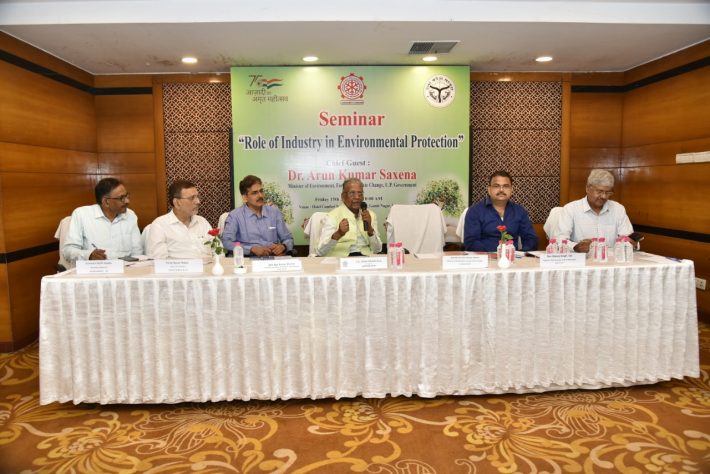 Lucknow: The Associated Chamber of Commerce and Industry of UP organized a seminar on the Role of Industry in Environmental Protection at Hotel Comfort Inn, Vibhuti Khand, Gomti Nagar, Lucknow.

The Seminar deliberated on the various phases of industrial development and the consequential reduced impact on environment. Tariq Hasan Naqvi, Senior Vice President, ASSOCHAM UP  welcomed the guests present in the seminar.  Naqvi advocated to revive net metering system for industries which has been withdrawn in 2019. The Government should come out with a Biomass policy to support productive use of dry leaves scattered in the forest which causes fire during peak summer season.

L.K. Jhunjhunwala, President, ASSOCHAM UP in his inaugural address  stressed the need of tree plantation for economic and social development.  Jhunjhunwala has appreciated the initiative of 350 million tree plantation. He also advocated ecotourism, vegetarian zoo, picnic spots, jungle safari as a economic development under PPP model. He however requested everyone to care for planted trees as the survival rate is comparatively low.  Jhunjhunwala has also advocated for plantation of fruits and ayurvedic medicine trees.

The Chief Guest Dr. Arun Kumar Saxena, Minister of Forest, Environment and Climate Change, U.P. Govt.  addressed the seminar virtually. Dr. Saxena  emphasized the need of tree plantation as a continued effort to enhance average forest cover area in the state. The forest cover area will definitely restrict the enhancement of global warming, he said. UP Govt. has launched massive plantation of 350 million trees and 300 million trees already . He requested the industrialists to plant trees within industry and residential campus and support Government to reduce Carbon dioxide Level. Dr. Saxena hoped to achieve the gigantic target and will also be able to retain it physically.

Sujeet Singh advocated that government and people to work together to reduce the pollutants. A tangible benefit should also be provided as in the case of Carbon credit.

Anil Agarwal  advocated for promotion of mini forest to promote plantation and their survival.

Virendra Nath Gupta, Secretary General, ASSOCHAMUP stressed economic development of a nation is essential for continued social and cultural development of the society. The physical infrastructure such as road, bridges, electrical and communication system plays a key role in economic development but these infrastructural development causes loss of natural resources. These losses are compensated to support ecosystem. The industries also generate pollutants but these pollutants are checked and controlled by various processes. The industries are running in its advance stage of processing at industry 4.0 thereby reducing pollution to minimum level. Moreover the industries are supporting environment through tree plantation.

Among the other august speakers were  Sudhanshu Rastogi,  Ram Krishnan and  R.K. Tiwari.

Ajay Saxena has informed that Govt. has started Geo tagging system to check the physical status of the planted sampling. This will defeinately help in increasing survival rate of the planted trees. Saxena has proposed vote of thanks to all the participants of seminar.