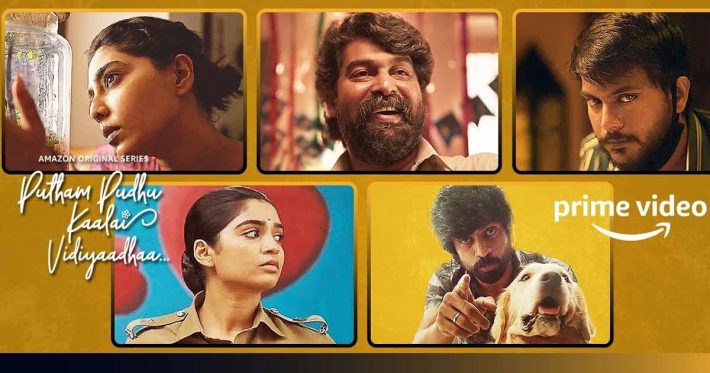 Mumbai:  On the auspicious occasion of Pongal, Sakranti, Bihu and Lohri, Amazon Prime Video treated the audience with the second installment of the anthology Putham Pudhu Kaalai – ‘Putham Pudhu Kaalai Vidiyaadhaa…’, putting forward heartwarming and soul stirring stories from the lockdown, being touting as the ‘best Anthology of the year’.

The audiences and critics have shared their verdict on the anthology and called it a massive favourite, across. The 5 episodes Tamil Anthology, shares 5 different stories revolving around the message of hope and new beginnings, combined with the powerful performances by the cast.

Check out what the audience has to say about it –

Loner has all my heart.
Cried ugly tears for this one.
The vulnerability and the guilt, what emotions we can't have a control on @iam_arjundas
You've lived this one as Dheeran!
Lijo Mol, don't you stun us each and every time!
Innena Vechirkinga, Santa Claus😭❤

Watched 2 episodes so far in PPKV, I wanted to tweet before I continue watching, I couldn’t control my tears when Dheeran opens up @iam_arjundas, & Nalla talks about Vivek and KV. @halithashameem excellent writing and screenplay. Mind blowing stuff this is #PPKVOnPrime #Loners

Not only the 5 episodes have left a long-lasting impression on the minda of the audience, but the critics too are all praise for the performances of each of the actors. From Nadiya to Joju, Lijomol Jose to Arjun Das and Sanath, Aishwarya … each performance has been hailed as a memorable one — some calling this a treat to watch and keep closer to heart.

Each story in Putham Pudhu Kaalai Vidiyaadhaa… is standalone and yet they are all bound together by the theme of personal discovery of hope and new beginnings through human connection. These are stories of optimism, love and second chances, set in the second Covid-19 lockdown. The stories feature Aishwarya Lekshmi, Arjun Das, Dhilip Subbarayan, Gouri G Kishan, Joju George, Lijomol Jose, Nadiya Moidu, Nirmal Pillai, Sananth, and TeeJay Arunasalam, and are directed by Balaji Mohan, Halitha Shameem, Madhumita, Richard Anthony and Surya Krishna.

Following the success of the first edition, Putham Pudhu Kaalai Vidiyaadhaa… promises to enthrall audiences with a heartwarming narrative that celebrates the spirit of resilience and grit in the face of adversity, successfully making it the ‘Anthology of the Year’. Streaming now on Amazon Prime Video!

Dr. Syed Rafat of Lucknow has been appointed Convener of Nations of Gulf Corporation Council