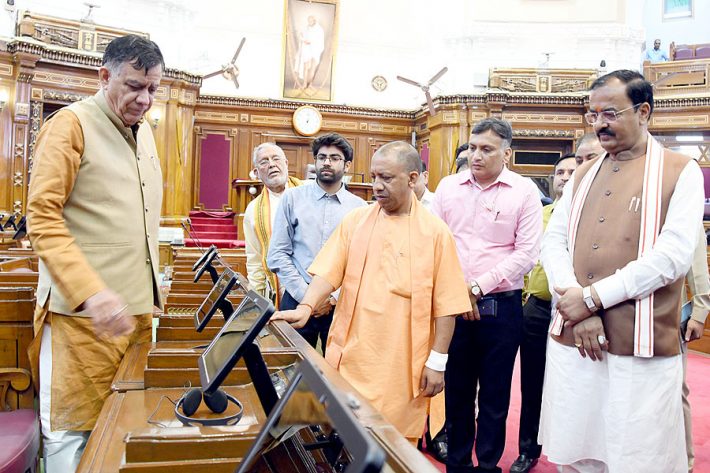 Lucknow: Speaking at the U.P. Vidhan Sabha on the increasing cases of crimes against women in Uttar Pradesh, CM Yogi Adityanath took a swipe at the Samajwadi Party saying that the approach under the BJP has changed. He said that now the party in power did not say that Bachhon se Galti Ho Jaati hai. He said any type of crime is unforgivable, the government is taking strict action on crime related to women.

This is the government of the Bharatiya Janata Party, where it is not said about the criminals that they are boys, they make mistakes, if they are criminals, then any action is taken under zero tolerance, the Leader of the Opposition understands this very well, know and acknowledge that action has been taken.

Yogi said you support every criminal who was synonymous with anarchy, hooliganism had become a profession, within the last 5 years, only the better law and order environment in the state has given wide support to this government again.

He said the  government will continue to take action on the issue of crime and criminals, if any person commits a crime publicly, this government cannot accept it, especially on crime related to women, this government had formed Anti Romeo Squad 5 years ago, along with that, 218 POCSO courts were also established in the state.

There has been a huge decline in the cases occurring all over the country. Before assembly or any elections, there was widespread violence, some people did some action in this election and even after that, but we, UP Police controlled that action within a few hours.

He further added – We often got complaints from elders, women, daughters, sick patients, newborn babies that unnecessary loudspeaker mics should be played from shrines, we appealed “More than one lakh mic loudspeakers have been removed or its voice was reduced, it could have happened earlier also, there should be will power, it was not there before, there was a tendency to see every work from the point of view of vote bank.

He also spelt out that it happened for the first time in history that Alvida prayers were not held on the streets, there was no chaos on Eid, festivals were celebrated in a peaceful manner”, Uttar Pradesh has become an example for the country today.

The property of more than 2 thousand crores mafia has been confiscated, the issue of security of 25 crore citizens or better law and order is the priority of the government, the government is working under zero tolerance

In the Siddharthnagar incident, after the police party went there, a person named Jitendra Yadav opened fire, the innocent woman who got shot, was caught…the administration has been given freedom to deal strictly against such criminals.. . Even before this incident of poisonous liquor in Azamgarh, the person who killed innocent people was also associated with the Samajwadi Party….the facts of this are proof…!!