Lucknow: Rewarding meritorious cops for their yeomen’s service, Chief Minister Yogi Adityanath honored personnel who have done excellent service in the police department. The awards were given at the Signature Building, the office of the Chief of Uttar Pradesh Police. In this ceremony, CM Yogi Adityanath honored 75 policemen and also gave them a big lesson on the spot.

Speaking at the Uttar Pradesh Police Excellence Service Award ceremony, CM Yogi Adityanath congratulated officers and personnel who received gallantry as well as other medals and reminded them of their duty. He said that if every citizen of the society starts discharging the duties honestly in their respective fields, then there will be no delay in achieving the goals and fulfilling the resolutions. I think this year of Amrit Mahotsav inspires all of us to do the same. ?

During this, Chief Minister Yogi Adityanath clearly said that if the police engaged in improving the law and order of the state give the right information in media and internet social media on time, then you will not become a villain. CM Yogi Adityanath said that medals were not given since 2019 due to corona virus infection. Earlier, a Tulsi plant was also presented to CM Yogi Adityanath on his arrival at the Signature Building.

City Organization spreads the word on benefits of meditation 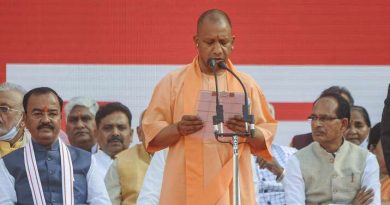