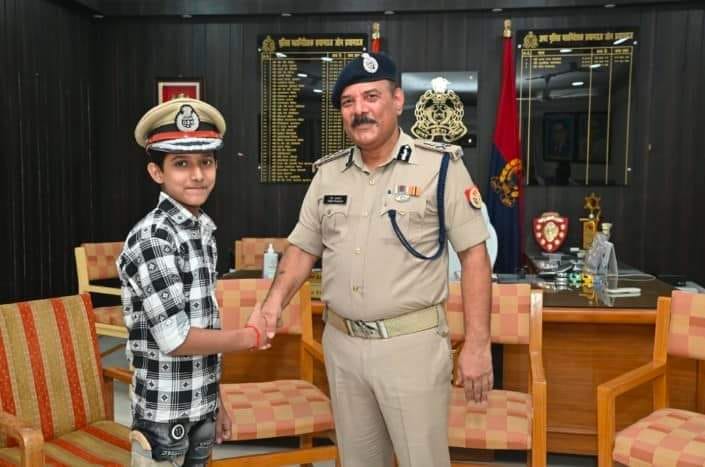 Prayagraj: It is said that every difficulty written in luck is averted, if you have high spirits then you will get the destination, if you raise your head and look at the sky again and again, you will get the inspiration to touch the sky and this proverb is coming true for a 12 years old of Prayagraj. Cancer patient Harsh Dubey was given a chance to serve the police force for a day.

To help Harsh, people belonging to  the district have come out as angels. To encourage Harsh, ADG Prem Prakash, along with giving body kit, also made Harsh a one-day ADG Prayagraj.

Harsh too, like a senior officer, sat in the ADG office and understood the police system, and after signing on many documents, proceeded with the work report. On the other hand, Dr. B. Paul, a famous doctor of Kamala Nehru Hospital and Padma Shri awardee, along with Dr. Radha Rani Ghosh and surgeon Dr. Vishal Keolani were also present.

The team of the city’s cancer surgeon doctor assured Harsh that now whatever treatment he will have, it will be completely free, as well as Prayagraj’s famous social worker Pankaj Rizwani also gave many items to Harsh to encourage Harsh. Harsh’s father drives an e-rickshaw in the city and with the same expenses, gets treatment for his family and son’s illness.

While having a special conversation, ADG Prem Prakash said that through social worker Pankaj Rizwani, he got information that 12-year-old innocent Harsh is suffering from an incurable disease, which needs help. In such a situation, the team of doctors treating Harsh and ADG Prem Prakash decided that to boost the morale of Harsh, he would do something that would make Harsh feel proud and because of this, today ADG Prem Prakash made Harsh the ADG for 1 day.

Doctor Paul, who is treating Harsh, said that cancer patient should always keep courage Cancer is an incurable disease but if treated properly and patient has courage. So the treatment of incurable disease has also become possible.

After sitting on the seat in the ADG office, many policemen were seen saluting Harsh. Along with this, Harsh also gave directions to the policemen posted in different areas of the district through wireless. Harsh was seen working in the office by putting on the cap of the ADG.

Empty plots facing the litterbug could get auctioned

Deepak Mukut to release Kangana Ranaut’s Dhaakad pan-India in Hindi, Tamil, Telugu and Malayalam on May 27, 2022