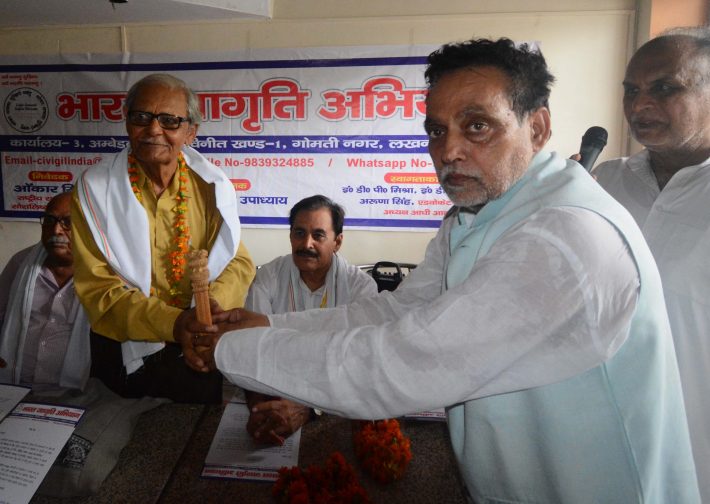 Lucknow: Under the auspices of Bharat Jagriti Abhiyan, on the occasion of birth anniversary of martyr Shiromani Chandrashekhar Azad and freedom fighter Bal Gangadhar Tilak, Jayanti celebrations were organized at Indian Coffee House, Hazratganj. Senior citizens from different sections of the society were also honored on the occasion.  Amir Haider  was honored at the event.

Speaking at the program, the speakers said that today India is a sovereign democratic republic. We have our own written constitution. We the people of India have complete freedom. There is freedom of expression. All this is the result of the struggle of the freedom fighters. The names of Lokmanya Bal Gangadhar Tilak and Chandrashekhat Azad are prominent among these heroes. We need to make the new generation aware of the legacy of freedom and keep it intact.

While addressing the seminar as the keynote speaker, Onkar Singh, the national coordinator of the Socialist Foundation, said that the entire life of Azad and Tilak is a philosophy of the struggles that took place in the then conditions of the country. With this, we need to take inspiration as well as walk on the same paths. Onkar Singh said that without assimilating the ideas of Azad and Tilak. We cannot protect democracy.

Yogendranath Upadhyay, the convener of the seminar said that today we will have to take a pledge to fulfill the dreams of Lokmanya Tilak and Chandrashekhar Azad. His dream was to make India a socialist democratic republic. For this Azad and Tilak gave their all.

Rajesh Pandey  was honored by giving a Peepal plant.

Speaking at the program, Ramkishore said that the India that Azad and Tilak had dreamed of has not been fulfilled till date. To make India of their dreams, we have to take a pledge of revolution.

Rajesh Pandey, president of the Senani family, said that the spirit of freedom that Azad and Tilak had to liberate the country is rarely found in revolutionaries. The same spirit needs to be inculcated in the new generation. 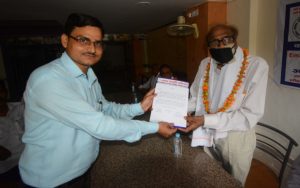