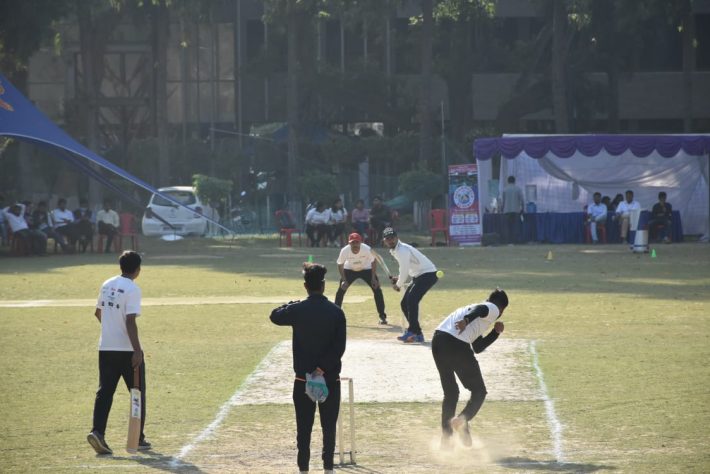 Lucknow: On March 12th and 13th, 2022, Jaipuria Institute of Management Lucknow organized Clash of Corporates 2.0, a two-day string of contests to promote sportsmanship and harmony amongst the corporate professionals. The tournament was organized by the Career Management Cell of Jaipuria Institute of Management, which promotes the career development and upskilling of the budding managers to create professionals of tomorrow.

The Clash of Corporates received participation from over 30 corporate organisations. The tournament featured games like Cricket, Volleyball, Badminton, Chess, Table Tennis, Carrom and Tug of War.The feud started with a Cricket match among the Bajaj Capital, One Oak, Daikin, Cars24, Religare, Tata Mutual Fund, Times of India, and Excella in 4 rounds of the match. The engaging day moved forward with another game of Volleyball that invited the participation of the corporates from Times of India, Hero Motocorp, LG Electronics, and Cars24.Indoor games like Chess, Carrom, Table Tennis also acquired immense participation from the partakers around the corporate world. The events, despite their indoor nature, gained momentous involvement at the same pace as the outdoor games attained.

The two-day flagship event concluded with observing the intense clash between the corporates. The evening witnessed the award distribution ceremony to felicitate the winners of the tournaments, graced by the presence of Dr. Sanyukta Bhatia (Mayor, Lucknow), Ms. Pankhuri Gidwani (Femina Miss Grand India), and Dr. Kavita Pathak (Director, Jaipuria Lucknow) setting a tone for the enthusiastic day.

“Games have a notable significance in our lives. Such competitions act as a medium to promote harmony among the youths”, said Dr. Sanyukta Bhatia, establishing an onset to the tournament.

The tournament played a pivotal role in leveraging affinities among the professionals belonging to various corporate entities.