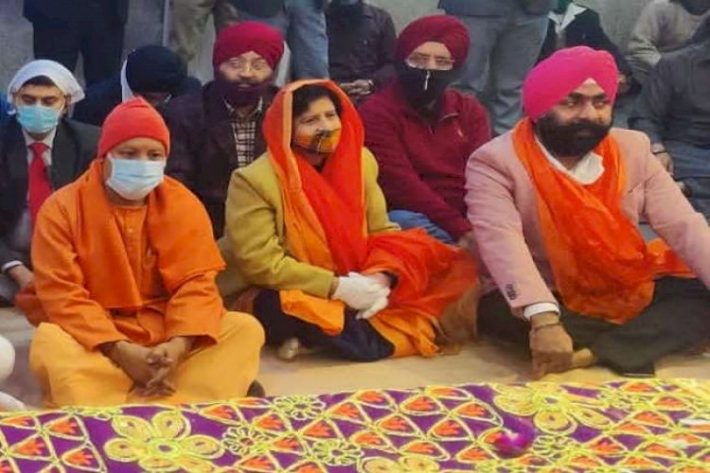 Lucknow: Chief Minister Yogi Adityanath paid obeisance at Gurdwara Naka Hindola in Lucknow on the 356th Prakash Parv of Guru Gobind Singh on Sunday. During this, he also called for respecting the Guru tradition. At Gurdwara Naka Hindola in Lucknow, Chief Minister Yogi Adityanath said that the Guru tradition which had shown a new path to the country, had done the work of laying flowers by adopting the shools lying on the path of the country and religion. It is our responsibility to give respect to that guru tradition, to have reverence for it. He said that Khalsa Panth is the name of an indelible tradition of devotion to sacrifice.

The decision of Prime Minister Narendra Modi to celebrate the martyrdom day of Sahibzadas on 26th December as Veer Bal Diwas on the occasion of Prakash Parv of Shri Guru Gobind Singh Ji Maharaj. It is a consolidated tribute to the nation for the incomparable sacrifice of Sahibzadas.

After bowing his head in front of Guru Granth Sahib, the Chief Minister said that Guru Gobind Singh Maharaj made a special contribution for the protection of religion and culture. Sikh Guru is an inspiration for all of us. He said that he got energy from the program dedicated to the Guru at the Chief Minister’s residence. With the blessings of the Guru, many problems were overcome.

He said that Guru Gobind Singh was a divine man. Sikh Gurus gave a new direction to India by protecting the country and religion. It is the result of the brilliance of the Guru tradition that wherever the people of the Sikh community are, they are contributing in the interest of the country. Dad Banda Sahib’s contribution also cannot be forgotten. Only the gurus of the Sikh society had the courage to kill the Mughal ruler Babur.

When Chief Minister Yogi Adityanath reached Naka Gurdwara to join the gaiety of Prakash Parv, then the whole court resonated with the Satshree Akal. On behalf of the committee, Chief Minister Yogi Adityanath was presented with a sword and a memento. Along with the Chief Minister, Urban Development Minister Ashutosh Tandon, Mayor Sanyukta Bhatia, Cantt area MLA Suresh Chandra Tiwari, member of the UP Minorities Commission, Parminder Singh, Trilochan Singh as well as the founder of Baba Deep Singh Society, Manmohan Singh Happy, people of Sikh society joined in