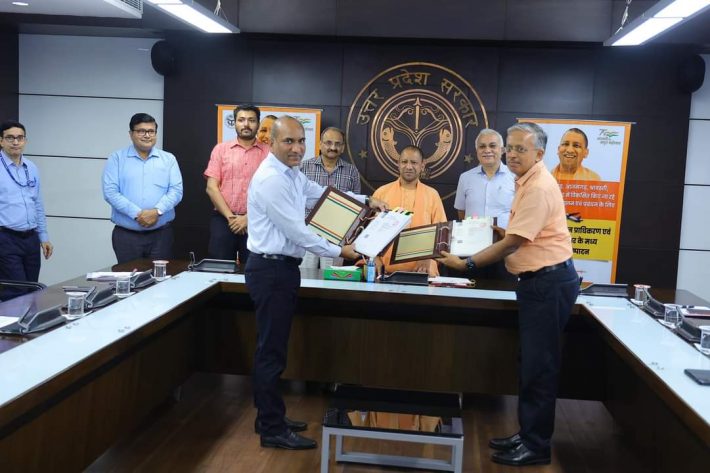 Lucknow:  Speaking on the occasion of MoU signing program with AAI- CM yogi said – I am happy that today an important MoU has been executed. Airports Authority of India is getting cooperation for the operation and management of the airports being developed in the selected districts of Aligarh, Azamgarh, Shravasti, Chitrakoot and Sonbhadra under the Regional Connectivity Scheme.

These airports are being set up in such areas which were left behind in the race for development due to certain reasons. Shravasti, Sonbhadra and Chitrakoot are aspirational districts. Air connectivity from here will give new wings to the development of these areas.

Azamgarh, which is in the east, no one could have imagined that an airport would be built here five years ago. People were afraid of the name here. We took the Purvanchal Expressway from the middle of Azamgarh. People used to say how would it be, when the work started, there was no protest anywhere. It was inaugurated by the Prime Minister.

Aligarh which is an important center of hardware. We are setting up a node of the Uttar Pradesh Defense Corridor here. Soon there will be better air connectivity facility here.

Chitrakoot is an important part of the Ramayana circuit. Maryada Purushottam Lord Rama spent most of his time in exile here. Here a very beautiful airport is being built on the hill at a height. I have seen.

Shravasti holds special importance from the point of view of tourism. It has been the capital of the son of Lord Rama, so Lord Buddha spent most of his Chaturmas here during his lifetime. Now air service is going to start from here.

Uttar Pradesh has benefited immensely from the ‘UDAN’ scheme launched by the respected Prime Minister. Before 2017, the state had airports mainly in Lucknow and Varanasi. Gorakhpur and Agra had partially functional airports. Then air service was available from 04 airports to only 25 destinations, today 09 airports are functional and work is going on 10. Today there is air service to 75 destinations. This is when we are facing Corona since last 02 years.

Before 2017, there was only one flight from Gorakhpur to Delhi. Today there are 14 flights and when I ask, it comes to know that all come and go after filling, this has given a new impetus to the development of Gorakhpur. Similarly, by preparing the airport in just 11 months, Prayagraj gave good air service to Kumbh.

Uttar Pradesh is going to become a state with 5 international airports very soon. At present there are Varanasi, Kushinagar and Lucknow International Airports while construction is going on at Jewar and Ayodhya.

It is the responsibility of the government to provide better connectivity-good air service to 25 crore people of the state. We are successfully discharging this responsibility under the guidance of the Prime Minister. Air services are not just a general connectivity facility, but are also useful in accelerating tourism promotion. Uttar Pradesh will make its best contribution in realizing the Prime Minister’s vision of better air service.

The CM also directed to develop all these airports according to the standards of Air Bus A-320. In this regard, instructions have been given to the Airport Authority of India to take further action regarding the purchase of land after conducting the survey process at the earliest.