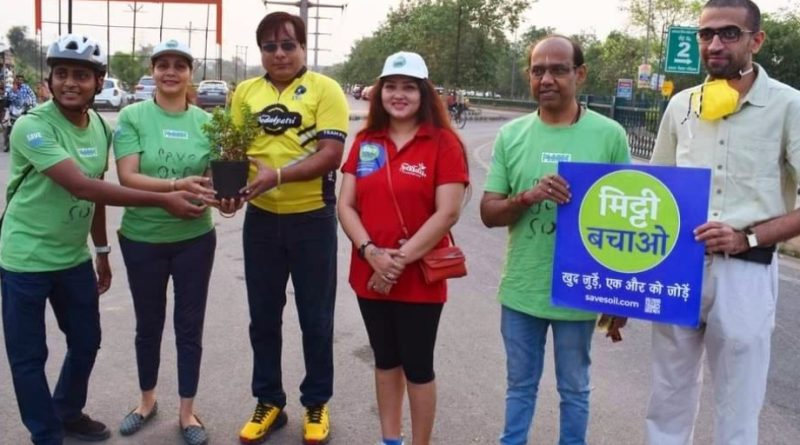 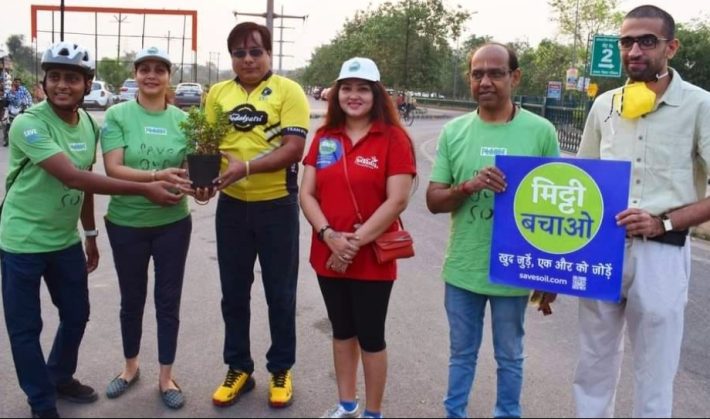 Lucknow: Volunteers of Isha Foundation covered 6 km on their cycles during the Cyclothon organized to give the message of environmental protection with save soil. Traveled. During this, the cyclist traveled from Janeshwar Mishra Park to Lohia Park and back to Janeshwar Mishra Park.

The campaign, started by Sadhguru Jaggi Vasudev last month, aims to bring about a change in national policy by mobilizing citizens’ support and creating awareness for the campaign to prevent and reverse soil erosion. The cyclists first danced to the Save-Soil song at Janeshwar Mishra Park at the start of the campaign, and told about their campaign among morning walkers in the park. The volunteers also answered people’s questions about the soil.

The Chief Guest, General Secretary of Pedal Passenger Cycling Association (PCA), Anand Kishore Pandey (Co-Secretary, Uttar Pradesh Olympic Association) flagged off the Cyclothon. He said that we have heard about saving water and air, now time has come to save soil. Soil is our source of food, it is losing its fertility and if we do not take steps now to reverse it, we will not have arable land in future.

Along with my cycling friends, I am happy to support this campaign, and I consider cycling to be one of the most effective means of creating awareness among people to save soil. Kushan Sinha, Ramesh Chandra, Arun Mishra, PK Singh, Ayush Pandey, Raj Smriti, Deepti Vallabh, Dr. Karun, Dr. Himanshi, Atul Maurya, Ravi, Ananya, Rahul, Vineet Nancy and others were present on this occasion.

Currently, Sadhguru Jaggi Vasudev is traveling 30,000 km for 100 days on a motorbike alone, through Europe, Central Asia, and the Middle East, as a part of a campaign to save the soil. They are meeting global leaders, scientists, environmental organizations, soil experts and other stakeholders for immediate policy-driven action to save soil from extinction.

The event was organized in the backdrop of Sadhguru’s upcoming keynote address at the 15th session of the COP15, the Conference of the Parties to the United Nations Convention to Combat Desertification (UNCCD). He will urge the heads of state and political leaders of 195 countries to implement policy reforms in their countries to save soil. Sadhguru will address COP15 tomorrow on 9th May and 10th May.

COP15 is expected to inspire member states to take concrete steps while near-earth time is decreasing to prevent and reverse rapid land degradation, which can lead to global desertification and soil destruction. Is.

The Food and Agriculture Organization (FAO) of the United Nations has warned that desertification could lead to a 40 percent decline in food production by 2045, while the world’s population will cross 9 billion. According to the UNCCD, if land degradation continues at the current pace, by 2050 90 percent of the earth could turn into a desert.