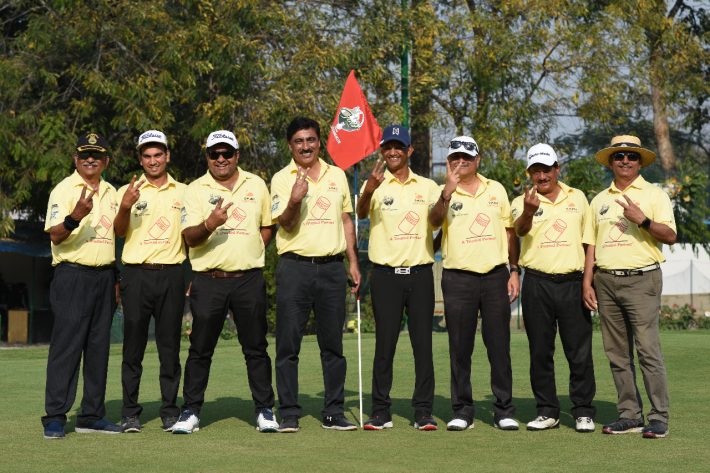 Lucknow, March 3: Dabang Daredevils lived up to their favourites tag as they beat Ballers 4-1 in a repeat result to top Group A and qualify for the semi finals top of the charts with 15 points at the end of the Awadh Golf League group stage here on Thursday.

In a fairly decisive result, Dabang Daredevils raced off to an early lead as Ballers kept chasing the game. The scoreboard pressure proved to be too much for Ballers who had to put some early points on the board for a chance to qualify. The youngsters, Anuj Dubey & Siddharth Sagar continued their fine form as they lodged up wins in their respective matches. Dabang, with their blitz, will enter the semifinals as the top seed and will play Ramswaroop TigerZ in the first semi final.

Ramswaroop TigerZ outlasted Bhutani Basecamp Champions 3-2 as they qualified from Group B edging out the other teams. Anchored by the pair of skipper Vikram Bhargava & Akshay Singh, the TigerZ won their three games comfortably and were never in a real danger of slipping out of semi final contention.

Group C toppers BMW Motorwagen & second placed SAS Fairway Kings will face each other in the other semi final as eight other teams will now compete for the Plate division title. The Plate quarter finals will be played on 9th & 10th March followed by the Championship Semi Finals on 11th March & Plate Semi Finals being played on 12th of March.

In the day’s other match, Fairway Ninjas defeated TeeRific 4-1 and fell short of their own qualification by a point. It seemed as if the Ninjas would make the cut but once TeeRific’s Karan Lohumi & Anuj Agarwal went 4 UP after 11, their hopes were extinguished. JPS Sial & Indra Dhaon were again the stars for the Ninjas as they racked up a fourth consecutive win.

Uttar Pradesh is well prepared for any threat from a third wave, if at all it comes – Yogi Adityanath

The Good that one man does