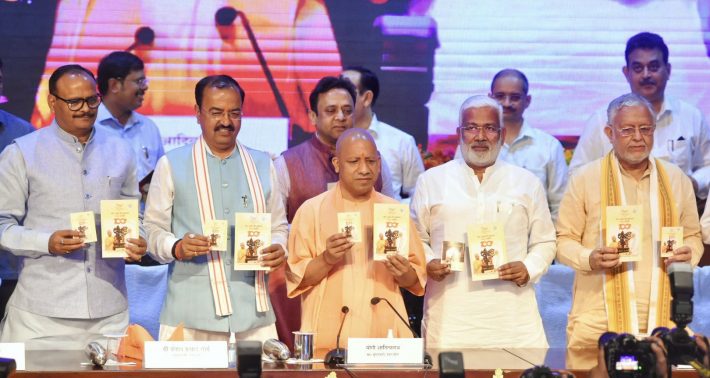 Lucknow: As the Yogi government completed 100 days in office, Chief Minister Yogi Adityanath laid threadbare an account of the achievements of the government on completion of 100 days dedicated to service, security and good governance. CM Yogi said that after 37 years in the history of Uttar Pradesh, after forming the government he successfully operated for a hundred days. He said there was absolutely no difference between words and deeds. He said this is a small example of the action plan done for different sectors in the state.

In the event held at Lok Bhavan, a book was released about the achievements of the government and a video was also shown. During this, he spoke freely on various issues including poor welfare, farmers welfare, law and order, health and medical facilities, education, infrastructure, investment, employment and self-employment, electricity, rural development, Jal Jeevan Mission and rural water supply and forest and environment. He also told about the achievements of the government’s public program.

He said that the second term has been given to us by the people, in this we are taking forward our journey with a new flight. The goal that the Prime Minister has set for the country to make India’s economy of five trillion dollars, naturally the role of Uttar Pradesh becomes important. He said our government has made a systematic action plan by selecting 10 sectors and has moved towards taking the economy of Uttar Pradesh to one trillion dollars.

Within 100 days, Yogi did the work of fulfilling the set target of 10 thousand police recruitment. On the law and order front, the Yogi government did the work of breaking the back of the mafia and within 100 days, a big work was done to confiscate illegal properties worth 844 crores from criminals and mafia.

Similarly, 74,700 loudspeakers were removed from religious places for the first time in history, of which 17,816 were given in schools. Apart from this, work was done to free 68,784 encroachment sites and 76,196 illegal parking places.

Similarly, the work of giving free gas cylinders and free bus travel to women was also done. Smartphones and tablets were distributed to strengthen the youth power keeping the youth at the center.

Within 100 days, MoU was signed between AAI and the state government under the chairmanship of CM Yogi regarding the operation and management of 05 new airports. The special thing was that during the work of 100 days, PM Narendra Modi also interacted with ministers of the government.

Through the cabinet meeting, free ration was increased in the state for 3 months. This benefited 15 crore card holders of Uttar Pradesh.

After the decision of free ration in the first cabinet in UP, now the first ground breaking ceremony was organized to bring investment in the state. In this, not only the country but many famous industrialists of the world participated.

BJP had made election promises to the public in the form of a resolution letter and the government had promised that it would be fulfilled by considering these promises as a resolution. Moving forward in this direction, Yogi Adityanath’s government had worked to fulfill 94 promises made in the Sankalp Patra in its first budget itself. Referring to this, Yogi had said that the government will move towards fulfilling the rest of the promises soon.

Keeping in mind the 2024 elections, the government appointed 18 ministers in 18 mandals of UP. All the ministers visited their respective divisions and submitted their report to the CM.

During the first government, there was an investment of 75 thousand crores in Uttar Pradesh. After this, the ground breaking ceremony was also organized in the second government of Yogi. The third ground breaking ceremony has been organized in Uttar Pradesh. The foundation stone of 80 thousand projects was laid in this program.

BJP grabbed power of the state in 2017 and then bypassing all the doubts, ‘Yogi Adityanath’ has got one more chance to rule. With another win, the ‘Yogi 2.0’ government has emerged as an impregnable force.

UP Minister sends out oxygen concentrators for the needy

Statement given by actress #ShwetaTiwari in Bhopal is condemnable