Lucknow: The state capital Lucknow witnessed a partial solar eclipse on Tuesday. During this, people prayed to God in their respective homes and on the other hand the doors of the temples were also closed. People gathered at Marine Drive in Gomtinagar in the evening to watch the last solar eclipse of the year.

Foreign people also joined along with the native. Shortly before the solar eclipse, the doors of all the temples in the city were closed. Famous temples include Hanuman Setu, South facing temple at Hazatrganj, while the doors of Aliganj, Old Hanuman temple remained closed.

People on the banks of the Gomti  saw the partial solar eclipse through the telescope. This arrangement was made by the UP Amateur Astronomers Club of Indira Gandhi Planetarium. During this, the scientists of the constellation told that five telescopes were arranged.

In Lucknow, the partial solar eclipse started from 4:36 pm and was visible till 5:29 pm. At this time, about 36.93 percent of the Sun was seen to be covered by the shadow of the Moon. The duration of solar eclipse in Lucknow was maximum 53 minutes. 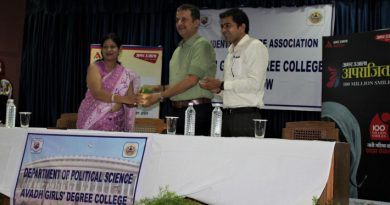