New Delhi: Reserve Bank of India (RBI) Governor Shaktikanta Das has said  that inflation in India is expected to moderate gradually in the second half of FY2023. Speaking at the Kautilya Economic Conclave organized by the Institute of Economic Growth, New Delhi, Das said, the market is looking right from the supply point of view and several high frequency indicators are headed towards recovery in the first quarter (April-June) of 2022-23. He said our current assessment is that inflation may moderate gradually in the second half of 2022-23.

Talking on the history of inflation in India, the RBI governor further said, inflation in early 2022 was expected to be significantly lower than the target rate of four per cent by the third quarter of FY2023, the projected average inflation rate for 2022-23 is 4.5 percent.

The RBI governor has also said that the current era is of globalization of inflation. The whole world is getting affected by this. RBI Governor Das said that the economy affected by the Corona epidemic has started improving but inflation continues to be a big problem and it is still above the estimates of central banks.

Das said, price stability is essential to maintain macro-economic and financial stability. Therefore, the central bank will take measures to maintain and promote macroeconomic stability. Factors beyond our control may influence inflation in the short term, but its movement in the medium term will be determined by monetary policy.

He further said, therefore, monetary policy should take timely action to stabilize inflation, so as to keep the economy in a strong position and on the path of sustainable growth.

The average inflation estimate at five per cent from the Survey of Business Forecasters for 2022-23 was also quite benign, he said.

However, it was overtaken by the Russia-Ukraine war from February 2022, leading to a sharp jump in global crude oil and other commodity prices, he added.

According to him, the purpose of RBI is to protect the economy and maintain financial stability.

“Our effort has been to ensure a soft landing. These objectives guide our actions today and will remain so in the future.

Das said that the benefits of globalization come with certain risks and challenges. The prices of food, energy, commodities and critical inputs are hammered around the world through complex supply chains.

In fact, recent developments call for greater recognition of global factors in domestic inflation dynamics and macroeconomic growth, underscoring the need for increased policy coordination and dialogue between countries to achieve better results, he said. .

According to him, insurance against such inevitable global shocks is ultimately built on sound economic fundamentals, strong institutions and smart policies. Price stability is important for maintaining macroeconomic and financial stability.

“We will continue to examine our policies with the broader goal of maintaining and promoting macroeconomic stability,” Das said. In this endeavor, we will remain flexible in our approach while remaining clear and transparent in our communications.

Active cases now down to 83 cases in Uttar Pradesh 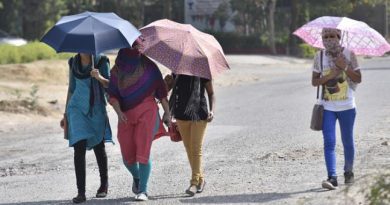 Sushant Singh Rajput to be brought alive in this Bollywood flick