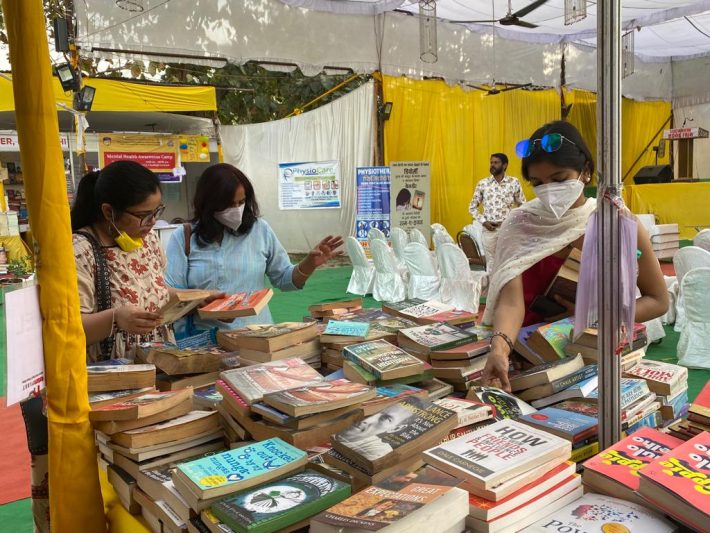 Lucknow: In the Lucknow Book Fair running in the Bal Sangrahalaya premises of Charbagh, there is a great choice of book lovers for the literature of women writers and women’s discourse. The search and shopping continued till late evening for the books of literature lovers at the fair book stalls. People bought books for the children including the family. The period of organizing literary cultural programs on the platform of the book fair  continued.

In the book fair, women’s discussions on different topics and books based on their issues have become the center of discussion among literature lovers. Hindi, Urdu and English books on novels, stories and discussions are also attracting people.

Apart from this, there are books like India’s Nari Ratna, Women in Satyagraha, Kasturi Parimal, Razia Sultan, Rani Laxmibai, Sobti Ki Sohbat Mein, etc. at the stall of Publications Division of Ministry of Information and Broadcasting.

The struggle of half the population of Mamta Jaitley near Rajkamal Publications Group, for the existence of a woman, Gloria Saynam, the female side of Sujata’s criticism, in the eyes of Rajendra Yadav’s man and the rebel Muslim women of the fiction world, Zahida Hina’s Pakistani woman, Ajmaish’s Half a century, Nivedita Menon’s books with a feminist viewpoint are etc. Similarly, books on heroines and women poets of Uttar Pradesh Hindi Sansthan are Subhadra Kumari Chauhan, Mahadevi Verma, Rani Laxmibai, Heroines of 1857 etc.
four books released

In the first session, four books were released under the chairmanship of Sharda Lal and conducted by Alka Pramod on behalf of Shardeya Prakashan and Kavya-Sattat Sahitya Yatra. Which included books like Aahton Ke Arth by Seema Agarwal, Yayavar Akhar by Nivedita Shree, Sugandha by Amita Mishra and Balsakha by Usha Soni. Along with the authors Ranjana Gupta, Om Nirav, Chandrashekhar Verma, gave their views on the books. In the second session, Shivmangal Suman, Anita Srivastava, Vinita Mishra, Sandhya Singh and Nivedita Shree impressed with their poetry under the chairmanship of Madhu Pradhan, the author of Kanpur and under the supervision of Akhilesh Pradhan.

Message of empowerment through plays

Various competitions were held under Vishwam Mahotsav in association with UP Tripathi, the founder of Vishwam Foundation. In which the children of Navyug Kanya Mahavidyalaya, Krishna Devi Girls Degree College and Government Primary School showed enthusiasm in street plays and dance. People were made aware through plays based on the themes of Swachh Bharat, women empowerment.

In the book fair, a free mental therapy camp was organized by the Department of Clinical Psychology, Amity University. In the camp led by Assistant Professor Ansuma Dubey, 53 people were tested and given proper counseling. 15 student counselors including Monal, Vinayak, Atul, Sneha, Aditi of the department were present in the camp.