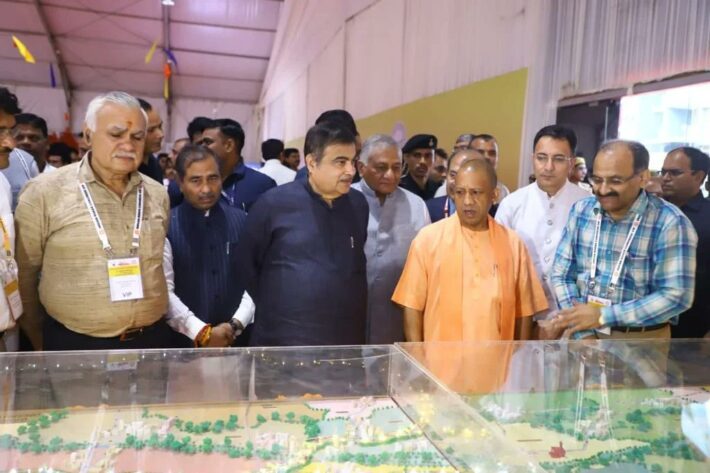 Lucknow: Chief Minister Yogi Adityanath addressed the inaugural session of the 81st annual session of the Indian Road Congress (IRC). On this occasion, he said that since the year 2014 under the leadership and guidance of Prime Minister Narendra Modi, the creation of basic infrastructure in the country was taken forward as a campaign. The Union Minister for Road Transport and Highways Nitin Gadkari has an important contribution in the creation and development of these basic infrastructures.

The models given by Nitin Gadkari have proved to be very useful. The revered Late  Atal Bihari Vajpayee gave the inspiration to build world class highways in the country and through the Golden Quadrilateral scheme, took forward the process of strengthening the road infrastructure of the country. The construction of roads in rural areas was started through Pradhan Mantri Gram Sadak Yojana. In the last eight years under the leadership of the Prime Minister, there has been a spurt in the construction of basic infrastructure in the country.

The Chief Minister said that under the guidance of the Prime Minister, the State Government has taken forward the process of construction of various basic infrastructures in the State in the last five and a half years. In order to bring positive changes in the lives of 25 crore people and to increase their income, it is necessary to improve the basic infrastructure. The state government has improved 4-lane interstate connectivity in the state. The state government has strengthened the law and order situation in the state and has made the industrial investment environment positive and has promoted ease of doing business.

The Chief Minister said that good infrastructure is the backbone of the economy. Good infrastructure is the first condition for the economy to grow. The state government has constructed world class expressways in the last five and a half years and has done the work of connecting Bundelkhand and Purvanchal region with expressways. The state government has successfully done the work of saving the life and livelihood of the people during the Corona period. Establishment of Covid Help Desk at work place, construction work of basic infrastructure continued in the state even during the Corona period. 02 expressways were completed on time. Meanwhile, the 12-lane Delhi-Meerut Expressway has been dedicated to the nation under the leadership of the Union Minister for Road Transport and Highways. A better network of interstate connectivity and highways has been laid along all the three expressways in the state.

The Chief Minister said that low cost, good and durable roads are being built using new technology in the state. Uttar Pradesh is the state to successfully implement FDR technology. Rural roads are being constructed in the state through FDR technology. This FDR technology has reduced the cost by one-third and has saved time and material. He asked the IRCTC to issue advisory every year. This advisory is related to the technology and safety of road construction, which should be followed by every state. Students of technical institutes of the state have also been associated with this conference of IRC, so that our students can become acquainted with modern technology.
The Chief Minister said that according to the present needs, we have to adopt new technologies. Road safety is an important and sensitive issue before the country and the state. According to the directions of Supreme Court, the state government is taking all possible measures for road safety. He said that he himself holds a meeting regarding road safety every four months. A lot of casualties can be reduced by improving the technology of road construction.
The Chief Minister said that IRC issues some of its medals for innovative ideas in road infrastructure.

The Union Minister for Road Transport and Highways, Nitin Gadkari said that the nectar that will emerge from the discussions in this Indian Road Congress will certainly be very useful for the country. India is the fastest growing economy of the world. It is the Prime Minister’s resolve to make the country a 5 trillion dollar economy. Our goal is to make a self-reliant India. For this, we have to improve the infrastructure facilities of drinking water, electricity, transport and communication in the country in every case. Without infrastructure facilities no industry can run, without industry no capital investment can come in the country, without capital investment we cannot create employment, without the possibility of employment we cannot remove poverty. Better infrastructure facilities are most essential for the development of the country. The development of road infrastructure is of paramount importance.

Gadkari said that he should join Indian Road Congress. The role of all people is that of Vishwakarma. So your role is important. He inspired everyone and said that where there is a will, there is a way. The challenges should be faced firmly and the tasks should be completed with full quality in the given time by establishing cooperation and coordination. Knowledge of the ground reality is essential while making plans. People should join it by promoting science, technology, research, innovation, enterprise and work efficiency. Knowledge is the most important wealth of our country.

The Union Minister for Road Transport and Highways said that our country has the largest number of young scholar scientists in the world. This is the reason why people’s expectations are also high. Coordination of wealth with knowledge is necessary and no person or thing is useless in the world. It is up to us how we take it. With the use of appropriate technology and research, applied can be converted into used. Our country is developing. Even Rs.01 of the cost is precious to us. He appealed that we should try to reduce the cost of our construction works and increase the quality. Applied tires can be used in road construction, as rubberized bitumen is very useful in building good roads. Therefore, environmental degradation can be reduced by making good use of waste plastic.

The Union Minister for Road Transport and Highways said that ethics, economy and ecology and environment are the main pillars of Indian society. We have to protect our ecology and environment. The road sector alone accounts for 40 percent of air pollution in our country. We import crude oil worth Rs 17 lakh crore. There has been a pattern of growth in our population and automobiles. In the past, there has been an increase in greenery in expressways and highways. This sector is providing employment to more than 04 crore people. At present, the use of renewable energy sources has increased in place of crude oil. Due to which the environmental damage has also been reduced. E-highway has been promoted. Electric trucks will start operating on the Delhi-Jaipur highway next month. The use of electric vehicles has increased in the country. We have to include electric vehicles in our transport system. These electric vehicles are economical with low cost. Uttar Pradesh will have to promote the use of electric vehicles by adopting the London transport model, which will reduce pollution in the state and people will also get the facility of easy transport. Uttar Pradesh is a leader in ethanol production. This ethanol (biofuel) should be used as a fuel for transport, which will also make farmers prosperous.

The Union Minister for Road Transport and Highways said that for a self-reliant India, we have to increase our exports and reduce imports. There is immense potential in our rural area and agriculture sector. We have to increase development in our aspirational districts. Also, all the stakeholders will have to increase mutual cooperation, coordination and communication. Fast decision making ability, transparent and corruption free administration, execution of works with absolute quality and timeliness and quality works with low cost in construction works will have to be enhanced. There is immense potential in all of you. In the coming times, according to the intention of the Prime Minister, our country will be the number-1 economy of the world. For this we have to develop world class infrastructure.

Earlier, the Chief Minister and the Union Minister for Road Transport and Highways inspected the stalls in the exhibition at the venue and presented medals and citations to some dignitaries by the IRC. On this occasion 06 IRC codes were released. Along with this, the souvenir of the 81st Annual Convention and the technical magazine ‘Pragyata’ of the Public Works Department, Uttar Pradesh were also released. 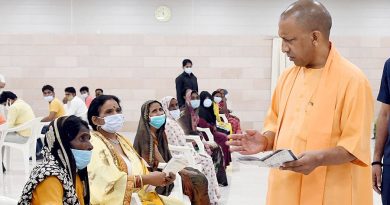 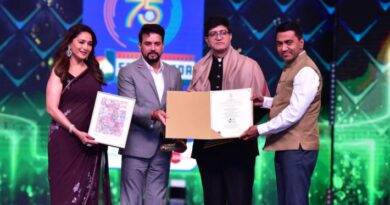