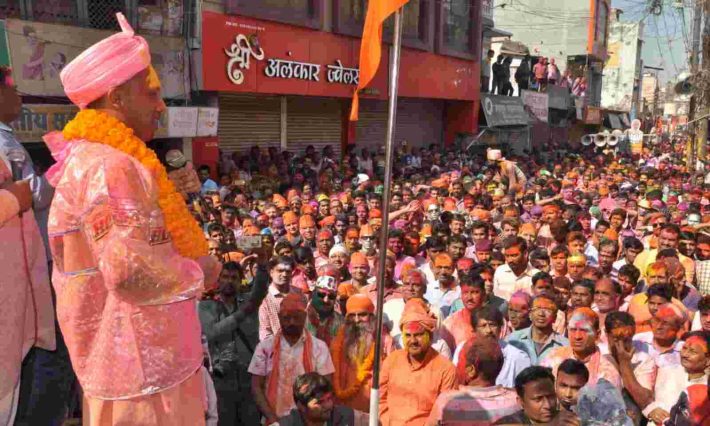 Gorakhpur: Uttar Pradesh’s caretaker Chief Minister Yogi Adityanath reached Ghantaghar to attend the traditional Lord Narsingh Shobha Yatra. The Shobha Yatra led by Gorakshpeethadhishwar and Chief Minister Yogi Adityanath will leave from the Ghantaghar. During the procession, people of Gorakhpur will play Holi of flowers, gulal and colors with CM Yogi. Police have also made tight security arrangements for the procession. This procession was not organized in Gorakhpur for the last two years during the corona virus infection.

The departure of Shobha Yatra will be marked by playing Rang Gulal. This time in the procession, the gaiety of the victory procession of the massive victory achieved by the BJP in the assembly elections will also be mixed. Every year, Lord Narasimha, the head of the Gorakshpeeth, drenched in colors, rides a chariot and Narasimha greets everyone on Holi during the Shobha Yatra.

At the same time, the enthusiasm of the people regarding the Shobha Yatra is building up. This time five trolleys have been included in the procession. Color has been mixed on them. Each trolley puck will have 15 to 20 volunteers. They will pour colors on the people by filling them in the pichkaris. There are 200 kg of abir-gulal, 2 quintals of rose and marigold flower petals, on which Holi will be played.