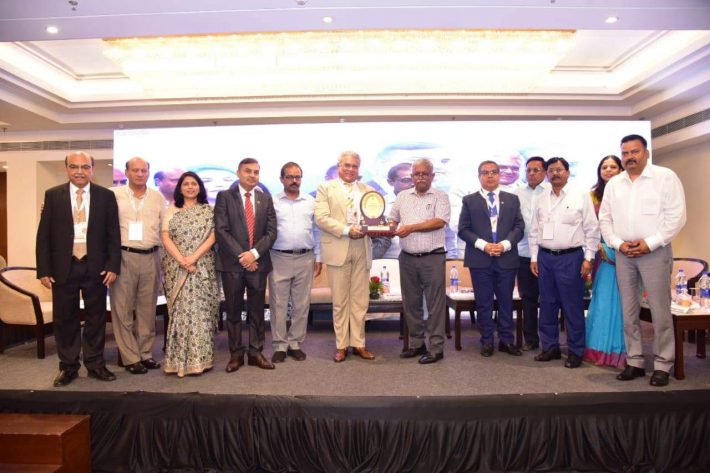 Chief Guest, Brajesh Pathak, Hon’ble Deputy Chief Minister, Uttar Pradesh encouraged the attendees and stakeholders for greater preparedness and awareness towards industrial hazards, safety practices and equipments. He said that with the increasing size of the industry unit, the chances of hazards and accidents increase, and hence it becomes very important to inculcate greater awareness and safety protocols in any unit.

He said that awareness of hazards assumes greater importance in rural areas where the use of LPG is still new and is gaining momentum. He said that with the aim of building a self-reliant India, the government is continuously committed and working to reduce foreign dependence, for which he said that till now our country has been dependent on other foreign countries for repair and maintenance of aircrafts, helicopters. Wasn’t dependent, but the government is soon starting the facility in Noida where servicing and repairing of airplanes will be done.

The minister also informed that the state is soon coming up with 17 new airports to enhance connectivity. Appreciating the efforts of the State Government, he said that the Government has been able to create a safe and healthy environment, and the same is visible when women and senior citizens come out on the streets with confidence and fearlessness. He congratulated the UP Chapter of PHDCCI for organizing this fruitful meeting and assured even more support from the Government for the deliberations and recommendations of the conference.

Awanish Awasthi, IAS, ACS, Home Department, Government of UP informed that the government is actively working for prevention of industrial hazards, especially fire accidents, which are most common in industries. He said that many industrial accidents, hazards can be prevented if only due attention is given to the safety control part and awareness training is given to the workers there. He also informed that the fire department has succeeded in setting up fire stations in all tehsils of the state and now the target is to set up fire stations in all 819 blocks of the state to reduce fire accidents. He appreciated the good work being done by PHDCCI and said that he is happy to be invited to such meaningful seminars being organized by the Chamber again and again.

Avinash Chandra, IPS, DG – Fire Services, Government of UP gave a very detailed speech on the importance of Industrial Safety and Disaster Response. He explained that it becomes very important for any industry unit to incorporate safety practices and foresight/preparedness against accidents in their area of ​​operation. Also, it is also very important to have real time rehearsals/practices towards evacuation in case of any industrial hazard/accident, he added. DG Fire also stated that 65% of fire hazards are due to shot-circuits, simply because the wiring is old and prone to danger, which is why it is important to check the wiring condition for any malfunctions. It becomes very important to conduct audits from time to time. He informed that at present there are 42 meters long hydraulic platforms in the state, but now the need is 72 meters long hydraulic platforms, which are especially needed for high-rise apartments in districts where many buildings are close to 100 meters . He said that an integrated effort between government departments and corporate institutions would help in reducing the number of industrial hazards. He thanked PHDCCI for organizing such an interesting forum to educate many industry stakeholders.

Rajnish Chopra, Managing Director, Safety Controls & Devices Pvt. Ltd., who was also the President of the conference, addressed the conference and lauded the gathering of subject experts from different parts of the country gathered on this forum. He said that more awareness about industrial hazards and prevention techniques/safety equipment has led to a lot ofAccidents can be prevented. He appreciated the efforts of the State Government, especially the Fire Department, in which a lot of work has been done to facilitate easy clearance and No Objection Certificate from the Government. Former Co-Chairman of UP Chapter, PHDCCI and a very renowned and senior industrialist, Rajnish Chopra assured that with such collaborative efforts between Government and Industry, we will soon be able to create a secure and resilient state.

Mukesh Singh, Senior Member, PHDCCI said that Uttar Pradesh has recently turned into a preferred investment destination in the country making it an industry based economy as well. He said that given the prosperity of the vast scope of investment, the state is now resilient to its position to emerge as a preferred industry destination not only for the service sector but also for the manufacturing sector, which is why a secure Creating work becomes equally important environment in the state which will also tie towards making the state a trillion-dollar economy.

The first day of the conference saw a large number of participation from industry, government, academia and other walks of life, who deliberated on various industrial aspects and participated in the session.

BJP to hold marathon ashirwad yatras to drum up support

Its a new dawn, a new day for farmers as talks resume with government