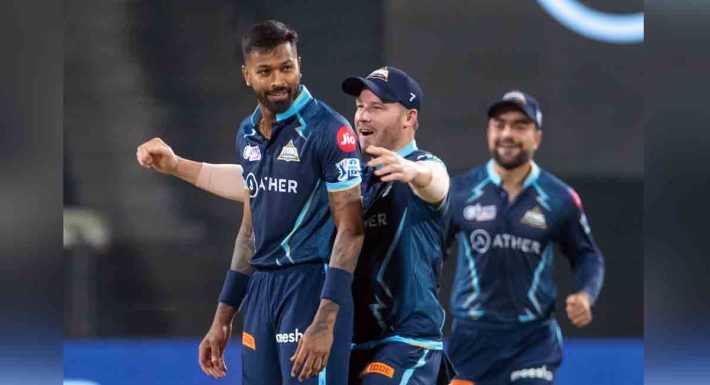 Mumbai: In the 24th match of IPL 2022, Gujarat Titans defeated Rajasthan Royals. Gujarat won by 37 runs in the match played at DY Patil Stadium in Navi Mumbai. This is its fourth win this season and  is now at the top of the points table with eight points. Chasing Gujarat’s target of 193 runs, Rajasthan’s team could only manage 155 runs for the loss of nine wickets and lost the match. For Gujarat, Hardik Pandya performed brilliantly in all three areas. He played an unbeaten innings of 87 runs in the batting and then took a run out as well as took a wicket.

Jos Buttler gave a quick start to Rajasthan Royals chasing Gujarat’s target of 193 runs. However, Rajasthan lost the wicket of Devdutt Padikkal for 28 in the second over. After his dismissal, Ravichandran Ashwin was sent to bat at number three but he too got out after scoring eight runs. From the other side Jos Buttler completed his fifty in 23 balls. However, Butler returned to the pavilion after being bowled by Ferguson on the very next ball.

After Butler’s dismissal, the Rajasthan team faltered and his wickets kept falling at every short interval. Although Shimron Hetmyer played some quick shots and scored 29 runs in 17 balls, he too failed to play a big innings.

In the end, the Rajasthan team could only manage 155 runs for the loss of nine wickets. Butler scored the highest 54 runs for him, while Loki Ferguson and debutant Yash Dayal took three wickets each for Gujarat.

Earlier, batting first after losing the toss, Gujarat Titans scored 192 runs for the loss of four wickets in 20 overs. However, it had a very poor start. He lost his top three wickets for 53 runs. But, captain Hardik Pandya and Abhinav Manohar put together a strong partnership of 86 runs for the fourth wicket. During this, Hardik scored his second consecutive half-century of the season. While Abhinav Manohar was dismissed after scoring 43 runs in 28 balls. In the end, David Miller and Hardik shared an unbroken 53-run partnership for the fifth wicket. Miller remained unbeaten till the last after scoring 31 runs in 14 balls. Hardik scored the highest 87 runs for Gujarat and remained unbeaten till the last. Yuzvendra Chahal, Riyan Parag and Kuldeep Sen took one wicket each for Rajasthan. It is a great learning working with the great Ramesh Sippy: Sahil Sultanpuri