Mumbai: Telugu actress Hansika Motwani shared a reel of herself dancing on Allu Arjun’s song from his Blockbuster film Pushpa. Well, it’s not just the actress who is high on Pushpa’s fever. The entire nation who months after the release is still grooving to it’s music. Pushpa: The Rise, which was released in December 2021 is still making headlines for its trendy songs and massy dialogues.

Recently, Hansika Motwani, is one of the popular actresses who predominantly works in Telugu and Tamil cinema posted a reel performing her first’ ever co-star Allu Arjun’s Pushpa step. Looking at the same, superstar Allu Arjun reposted the video of his co-star! Allu Arjun starrer Pushpa: The Rise, directed by Sukumar fared well, at the box office and broke several box office records and even entered the Rs. 100 crore mark in Hindi belts, and went on to mint 300cr worldwide.

New Gram Rozgar Sevaks to lead from the front 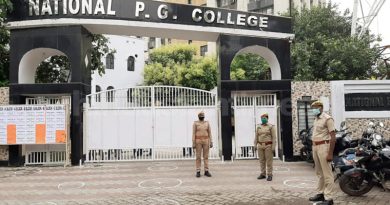 National P.G. College tweaks its exam dates for its students Priyanka is the New Black