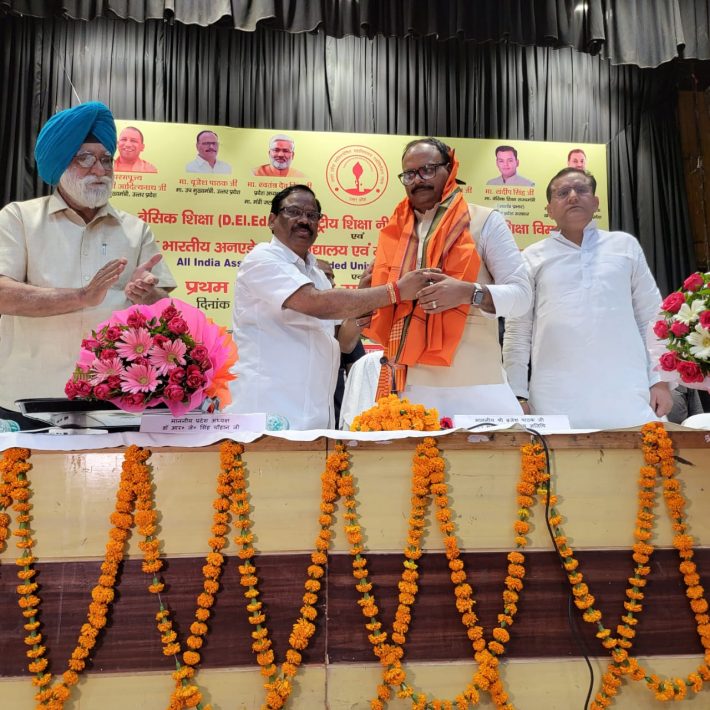 Lucknow: The first annual convention of the managers of more than one thousand colleges from all 75 districts of Uttar Pradesh was held under the banner of Uttar Pradesh Self Financed College Association (T) in Visvesvaraya auditorium. The above conference was held in two phases.

Welcoming the Hon’ble Deputy Chief Minister, Hon’ble State President Dr. R.J. Singh Chouhan made a detailed mention of the work being done through the Association and proposed to set up this Association at the national level, which will be implemented in Uttar Pradesh as well as other states.

The managers who came  gave their approval happily. The name of the said national association was named “All India Unaided University and College Association (T)”. For which the President of Uttar Pradesh, Dr. R.J. Singh Chauhan was unanimously declared as the National President.

Hon’ble Deputy Chief Minister Brajesh Pathak, while expressing happiness over the national formation of the Association, assured the present members that the State Government is committed to the interests of the self-financed college and also called upon the managers that under the new education policy of the government, the colleges and university should work in a committed fashion.

In the program, Dr. S. P. S. Sandhu, the patron of the college association, presented a fifteen-point demand letter to the Hon’ble Higher Education Minister regarding the practical problems being faced in higher education. Along with the fee fixation, adopting the simplification process of approval of teachers and submitting a memorandum to intermediate the minimum qualification for admission to the ongoing D.L.Ed course in the state and to separate the D.L.Ed course from the B.Ed course, whose association’s state president and Newly appointed National President Dr RJ Singh Chouhan, while supporting, made a strong demand to resolve the demands of the managers with the Honorable Higher Education Minister and Hon’ble Chief Guest assured to solve the problem very soon.

This program was organized for the first time in the history of Uttar Pradesh, in which the government and management partners sat face to face and started an innovative experiment in the state for mutual discussions. The said program was successfully conducted by the General Secretary of the State Organization, Dr. Vivek Tangri. At the end of the program, Hon’ble State President Dr. RJ Singh Chouhan  concluded the program with a vote of thanks.

Surveys give BJP the edge as voting comes to an end in U.P.