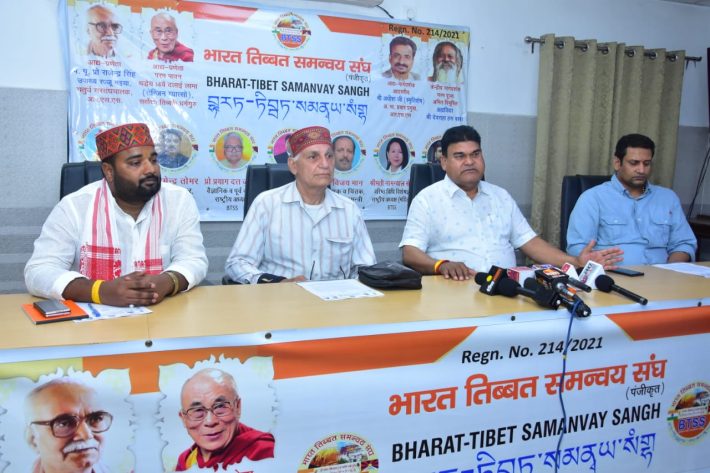 Lucknow: The independence of Tibet and the liberation of Kailash Mansarovar are directly related to the integrity and sovereignty of India.

Indo-Tibetan Coordination Association (BTSS) is engaged in this.

Sangh’s Eastern Uttar Pradesh region convenor Ram Kumar Singh said in a press conference held in LU’s DPA auditorium  that Tibet has been largely an independent nation for centuries, but the peace and compassion of India-born Lord Buddha can be fully understood.

It has been such an assimilating country whose relations with India are very close. The mutual love and affection was so strong that there was never even an army from either side on the border line. As long as Tibet was in independent existence, we were also under no threat.

Tibet, which in Sanatani religion has been called Trivishtap, meaning the land of heaven, was fraudulently annexed by China in 1959 and the situation was worsened by bloodshed there.

In 1959, the Dalai Lama took refuge in India along with thousands of Tibetans after saving their lives. After that, raising the slogan of “Hindi Chinese Bhai Bhai”, China attacked us in 1962 and grabbed a large part of the country, which is still in its possession.

Even today, China continues to do wickedness and deceit on the Tibet border of India. Even after losing to India in Dokhlam and Galwan, the Chinese do not desist from their wrath. To fight the threats of China, India has to deploy its army on the three and a half thousand kilometer long border line from Ladakh to Arunachal Pradesh. Thousands of rupees are spent on this every day.

In the press conference, Awadh Province President Kushagra Verma said that the Government of India is still making a lot of efforts to save the country from the conspiracies of China, but now every Indian needs to do this effort. Along with the security of the country, the call of Shiva devotees is also being done by the Indo-Tibetan Coordination Association. Those who want to worry about Bhole Baba’s own native place – the original village i.e. Kailash Mansarovar, is also connecting them.

Kailash-Mansarovar is located in Tibet, but since its occupation by China, China puts so many obstacles in the path of Shiva devotees to visit there that they want no one to come there. Therefore this place also needs to be freed from the clutches of China.

This is a big fight and it will be possible only with the rise of the people, so this is a war of defense of the nation and protection of religion, which the government as well as the whole world community have to do. It is headed by the Indo-Tibetan Coordination Association.

Himanshu Singh, the chief province coordinator of the Sangh, said that China is actually a country that gives coronavirus, sponsors all kinds of terror and has the world’s most repressive thinking, which is a stigma on humanity, so everyone has to be aware.

The cooperation of the media is also expected in this. In this direction, regional conventions are going to be held in Lucknow on Saturday, April 30, with the key officials of the four provinces of Eastern Uttar Pradesh region (Awadh Province, Kanpur-Bundelkhand Province, Goraksha Province and Kashi Province).

Its main theme is that we have to act aggressively. This is an auspicious time because Yogi Adityanath ji, the carrier of Nath tradition established by Lord Mahadev of Gods, is presently the Chief Minister of Uttar Pradesh with a strong and holy spirit, so we will move fast towards freeing Kailash Mansarovar and Tibet from the clutches of China. . In making such a strategy, the only goal is to make the people stand with strong nationalism and assertive religiousism. The goal is to make a revolution for peace. We need your cooperation in this because it is in a way like the beginning of the second phase of the country’s independence.

Introducing the organization, State Patron Mahesh Narayan Tiwari said that the Indo-Tibetan Coordination Sangh is actually an organization started by the inspiration of the fourth Sarsanghchalak of Rashtriya Swayamsevak Sangh, Prof. Rajendra Singh Upakhya, Rajju Bhaiya and His Holiness the Dalai Lama.

For the liberation of Kailash-Mansarovar and the independence of Tibet in the world, this organization should be the fastest growing organization worldwide, in this direction work is also being done by creating the State Department. Along with this, 18 divisions have also been created for the work by adding every category. The organization has been formed in almost all the provinces of the country and now soon the senior officers of the Sangh are going to meet the President in the country.

Getting into skin of Zain