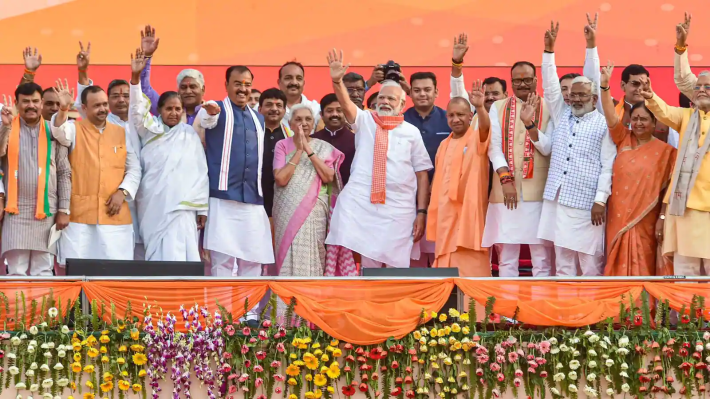 Lucknow: The portfolios of  the ministers of Chief Minister Yogi Adityanath was decided by giving them posts, but the concern about coordination and results in department distribution is clearly visible.

It is understood that an attempt has been made to address those questions in the distribution of portfolios and the responsibility of many big portfolios considered more important from the political point of view has been given to other senior ministers.

Similarly, making Brajesh Pathak as Deputy Chief Minister was not liked by many people. Behind the scenes, Pathak’s old BSP background is being carried forward.

Brajesh had switched from BSP to BJP before the 2017 assembly elections. But, there was a solid reason for making both the Deputy Chief Ministers.

The talk of losing the election has its place, but Keshav is the only backward face of BJP in UP, in whose name the crowd gathers. Similarly, in the last five years, Brajesh Pathak has been able to make a mark in the form of a Brahmin face with his activism. In such a situation, the coronation of both the leaders to the post of Deputy Chief Minister was not surprising.

Despite the defeat long before the announcement of the cabinet, the speculation of making Pathak as Deputy Chief Minister in the form of Keshav and Brahmin face was on the lips of the people. But in the department distribution, there is an attempt to cool down the questions arising from within the party.

Second, most of the MLAs of the 17th Assembly were satisfied with their work in the Public Works Department. Keshav has been given the responsibility of Rural Development Department, which is considered to be of little importance than Public Works. However, this department is directly related to the life and livelihood of the rural population. A big scheme like PM Sadak Yojana is together. He can leave a different mark in this department with his activism.

Brajesh Pathak made a distinction in helping the people affected by the epidemic in Lucknow during the Covid epidemic. By giving them departments like medical health and medical education together, importance has been given to their position along with their stature. But without giving a big department like PWD, city development or energy, the inner voice has been heard.

Whereas, along with livestock, milk development, minority welfare and Muslim Waqf departments have been given to senior minister Dharampal Singh. It is the responsibility of the Livestock Department to solve the problem of stray animals. Similarly, Asim Arun, who left the job of IPS and joined politics, has been given a big department like social welfare. The future of the betterment of lakhs of children belonging to Scheduled Castes is associated with this department.

The allocation of Public Works Department is considered to be the most shocking in the division of the department. This responsibility has been given to Jitin Prasada, who switched from Congress to BJP a few days before the 18th assembly elections.

After the information of the department was made public, many BJP MLAs called and expressed their surprise over giving such an important department to Jitin.

The MLAs say that Jitin has come from another party. Now party MLAs will decorate his court. Although Jitin has been a minister in the center and also has experience of minister in the state government. He is soft spoken and gets along easily. Second, there is also a Brahmin face in the social equation and he also has a comfortable relationship with the Chief Minister. It is being told that having a comfortable relationship with the CM proved beneficial for Jitin. But, how he will be able to satisfy all the MLAs, everyone’s eyes will be on it.

Bureaucrat-turned-politician Arvind Sharma had to wait a while for a stake in the government. But, his stature has remained no less than that of a Deputy Chief Minister. He has been given big power departments like urban development, urban holistic development, urban employment and poverty alleviation departments along with energy and additional energy sources.