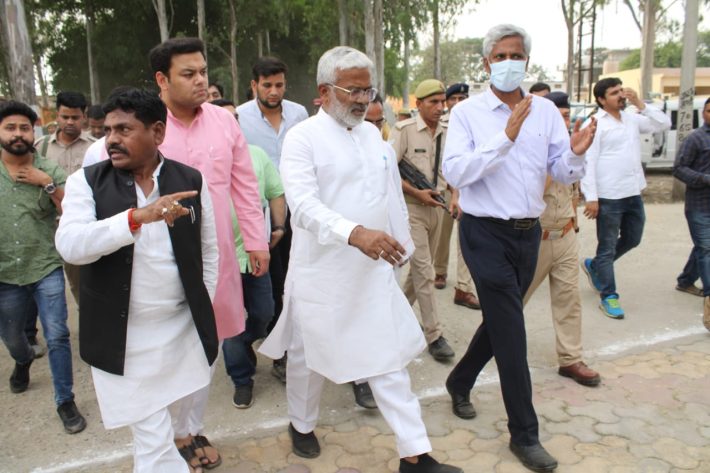 Lucknow: Uttar Pradesh’s Jal Shakti Minister (Irrigation and Water Resources, Flood Control, Fallow Land Development, Minor Irrigation, Namami Gange and Rural Water Supply Department) and Minister in-charge of Moradabad Mandal, Swatantra Dev Singh visited district Moradabad under the program of ex-secondary school Kuchavali. Under the Chapal program in village Shahpur-Mubarakpur of development block Chhajlait, after listening seriously to the public problems of the people, directed the concerned officers to solve them. He inspected the work done during this period and told the people that the government itself has come to your door for the purpose of listening to the problems of the people and providing detailed information about the schemes.

He said that the entire amount given by the government to the beneficiaries is coming in their account and corruption has been completely curbed. He said that today the government has benefited from toilets, gas connections, medicines, Ayushman cards and other schemes in every household, this is the result of the thinking of the Prime Minister.

Now pure water and pure food will be available at home, this scheme will be completed by 2024. He told that in today’s government there is no talk of caste, but it is a matter of development, the government has opened the treasury for the development of the village. He said that everyone should make their children get education compulsorily, serve the old parents and work with restraint, then surely they will move towards development. There will be times. Plantation of trees is an important task for mass accumulation, everyone should give their support to this important work. Women in the group do better work.

Hon’ble Minister distributed the keys of houses to the beneficiaries of Pradhan Mantri Awas Yojana under the Chapal program and inquired about the work being done by the women of the group, what kind of work they are doing to benefit the group. On the complaint of the road in Chapal and the chemical water coming from the factory in the pond, he immediately directed the concerned officials to resolve it. Appreciating the work being done by a person of the village to save water, he said that other people should also take inspiration from them and cooperate in saving water.

On this occasion, the information of the state and the government was apprised to the general public in detail by the project officer and was informed about the progress of development works. Under the Chapal program, the basic data of Gram Panchayat Shahpur Mubarakpur, beneficiaries benefited from MNREGA, PM Awas, Swachh Bharat Mission and various types of pension schemes and National Rural Livelihood Mission, Rural Electrification, National Food Security, Anganwadi Center etc. Provided detailed information in

UP is the land of revolutionaries, it was from here that the flame of freedom was born: Yogi