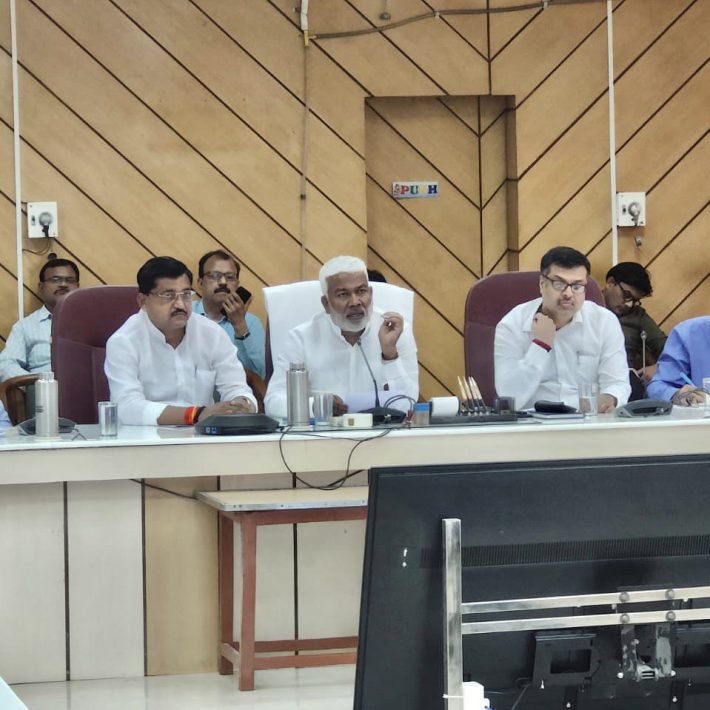 Udayganj: Uttar Pradesh’s Jal Shakti Minister (Irrigation and Water Resources, Flood Control, Minor Irrigation, Namami Gange and Rural Water Supply)  Swatantra Dev Singh held a review meeting with the departmental officers in the auditorium of Irrigation and Water Resources Department Headquarters, Udayganj . In the review meeting, the Jal Shakti Minister inquired about the flood related projects and works related to flood, seal cleaning, physical/financial progress of the existing projects and directed the concerned officers that there should be no negligence in the projects.

On this occasion, he inquired about the details of works being done in Bundelkhand region, works related to irrigation (mechanical), fallow land development and directed that the projects should be completed within the stipulated time period with special attention to quality.

The Minister of Jal Shakti has asked the engineers to prepare and present a plan to provide water to the farmers by connecting canals at low cost in their respective areas. He said that the complete details of the project and the remaining works should be submitted and how many gaps are left in the canals, they should be identified and immediate action should be taken.

He has also given instructions to 05 officers at the data center and call center for continuous information.
Principal Secretary Irrigation and Water Resources Shri Anil Garg has assured the Minister that the instructions given by him will be strictly followed. Under construction projects will be completed in a time bound manner.
Minister of State Jal Shakti Shri Ramkesh Nishad, Special Secretary Irrigation and Water Resources,  Anita Singh Verma, Chief Engineer and Head of the Department,  Ashok Kumar Singh, Principal Engineer (Project) Shri Mushtaq Ahmed, Chief Engineer (Period and Employee) Shri NC Upadhyay , Chief Engineer (Mechanical) Shri Devendra Agrawal along with other departmental officers were present.

ISRO Rules: PSLV – C51 with 19 satellites blasts off to space

Towards a child beggar free tomorrow