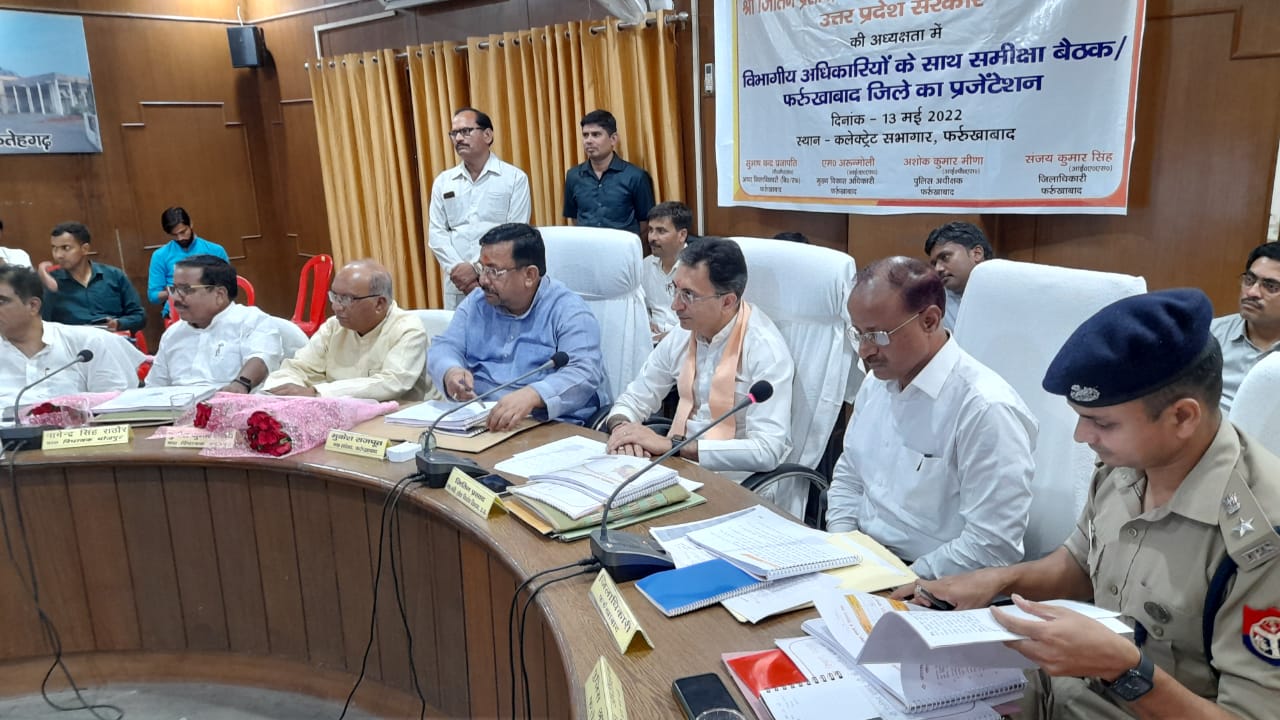 Hon’ble Minister directed to complete the construction work of Nisai Electricity Substation in the month of June. It was informed in the meeting that three flood control projects of Ganga and Ramganga rivers have been constructed in the district.

Hon’ble MP said that work has not been done for the prevention of erosion in Kallu Nagla, Trithyam ki Madaiya, Katri Gangpur, Lengaon.

Proposals were also made for it but it did not work. Hon’ble Minister directed the Executive Engineer Irrigation to include the above villages in the proposal and send proposals to other such villages which are more affected by floods.

PHC Ramannagulzarbagh has been handed over soon, the staff has not been appointed yet. Hon’ble MLA Kayamganj told that there is a shortage of doctors in CHC/PHC. Those who are posted remain absent. The Chief Medical Officer said that action has been taken to stop the salaries of absent doctors.

Hon’ble MLA Amritpur was told that 73 lakhs was approved to make it walkable on the bad road. No work has been done. Hon’ble Minister directed the Executive Engineer National Highway to immediately start the patchwork work by demanding immediate budget for the repair of the road from Beber to Farrukhabad. In the problem of the district, it was told that there is no medical college / any upgraded hospital in the district.

The Hon’ble Minister instructed the District Magistrate to prepare and send the proposal. Instructions were given to send a proposal for upgradation and commercial use of Mohammadabad airstrip. Proposal should also be sent to build an electric crematorium in the district. A proposal should be sent to beautify the museum built in the district. Instructed the District Magistrate to conduct an inquiry into the construction work of the newly constructed PHC Ramannagulzarbagh. Instructions were given to deploy coaches along with handover to the newly under construction Multipurpose Hall, Mudgaon, Mohammadabad. Public representatives inspect and check the quality of construction works.

The District Magistrate should conduct a thorough investigation of the gap that has happened for 7 years in the construction work of drinking water scheme, what is the reason for the delay and who is responsible for it. There are many complaints about drinking water schemes. The Hon’ble Minister instructed the Executive Engineer Jal Nigam Rural to work in Farrukhabad for three days. The public representatives told that water tanks are there in rural areas but water is not being supplied from the tank. The Executive Engineer, Jalnigam Rural, was instructed to immediately get the supply rectified from the tanks made in the rural area and visit the Hon’ble public representatives.

Supplementary Budget in U.P Assembly to be tabled