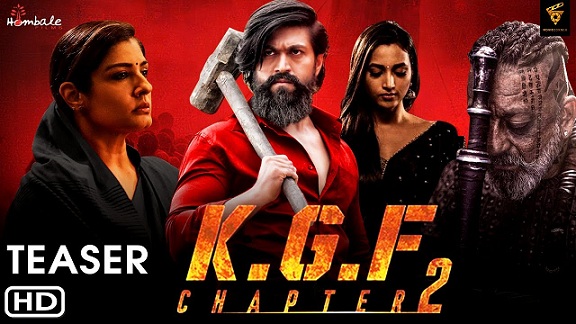 Mumbai: The most anticipated movie of the year KGF Chapter 2 is all set set the screens ablaze on April 14, 2022. Superstar Yash aka Rocky is back with the mega canvas action-entertainer! With the record breaking success of the first film, the makers, Hombale Films have now announced the release of the first single ‘Toofan’, releasing today! Rocky the lone ranger, will establish his supremacy in the second installment of KGF as he goes toe to toe with foes, old and new!

The unveiling of the first song ‘Toofan’ along with a new poster takes all of us back to the original hit machine that achieved a cult status and was the highest grossing Kannada film of all time!
Also, the upbeat music video of ‘Toofan’ starts the month-long countdown to KGF Chapter 2’s release. The producers of the movie, Hombale Films stated, that this song will set the tone for the second instalment of KGF franchise. The crescendo of the lyrical musical video will strike a chord with all the fans of KGF and more! The energetic beats and the unbeatable rhythm of the track perfectly matches the saga of Rocky, the legendary warrior who fights against all odds to emerge as a true victor!

KGF Chapter 1, known for its immersive storyline, top-notch special effects, was filled with top class action sequences at par with global standards, world class cinematography and the legendary performance by Yash who became synonymous with his on-screen persona ‘Rocky’. The much-awaited sequel K.G.F Chapter 2 promises to carry the legacy ahead and surpass itself with a heavyweight ensemble starcast including Sanjay Dutt, Srinidhi Shetty, Raveena Tandon and Prakash Raj!

The period action film written and directed by Prashanth Neel, and produced by Vijay Kiragandur under the banner Hombale Films is all set to release nationwide on 14th April, 2022. One of the emerging pan India production houses, Hombale Films is all set to bankroll some of the biggest projects of the industry in the next two years. Hombale films is also the producer of their 3rd pan India movie with Prabhas’ titled ‘Salaar’. Prashant Neel, one of the most sought-after directors, who created a bang in Indian cinema with the massive hit KGF-Chapter 1 will be directing the movie.

KGF Chapter 2 will be presented in north India markets by Ritesh Sidhwani & Farhan Akhtar’s Excel Entertainment and AA Films, which are the biggest leading production and distribution houses in India. Excel have given hits like, Dil Chahata Hai, Zindagi Na Milegi Dobara, Dil Dhadakne Do, Gully Boy and many others.

Statue of Bhagat Singh, Sukhdev and Rajguru will be put together in Lucknow city: Mayor