Mumbai: Ahead of the trailer release of Brahmastra, filmmaker and television presenter Karan Johar  announced that superstar Chiranjeevi will lend his voice for the Telugu version of his much-awaited film. Karan Johar has shared a short video on his country’s social media platform Koo App, in which Chiranjeevi can be seen arriving at the dubbing studio in his own style.

Karan Johar wrote in his Koo post, “Chiranjeevi sir, welcome to Team Brahmastra! I am very grateful and honored to have lent your voice to the Telugu version of the film. May you make this family stronger with your immense talent and glory! for their excellent performance. Watch the trailer and the Telugu version will release on June 15 next.”

On the other hand, on Saturday, Bollywood actress Alia Bhatt shared a new motion poster of ‘Brahmastra’ to introduce the character of Anish – the artist, played by another south superstar Nagarjuna in the upcoming film.

‘Brahmastra’ is a three-part mythology based fantasy with Ranbir Kapoor and Alia playing the lead characters of Shiva and Isha. Apart from Nagarjuna, Amitabh Bachchan will also be in an important role in the film. The veteran actor will be introduced as Professor Arvind Chaturvedi in the film. The film will hit the theaters on September 9 in five Indian languages. 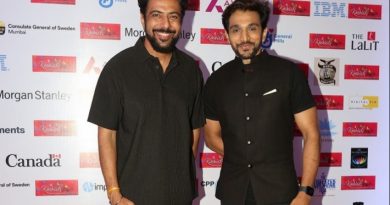 Townships around Jewar International Airport to add to Urban Landscape

Deanne Panday takes Elli AvrRam with her to the Maldives