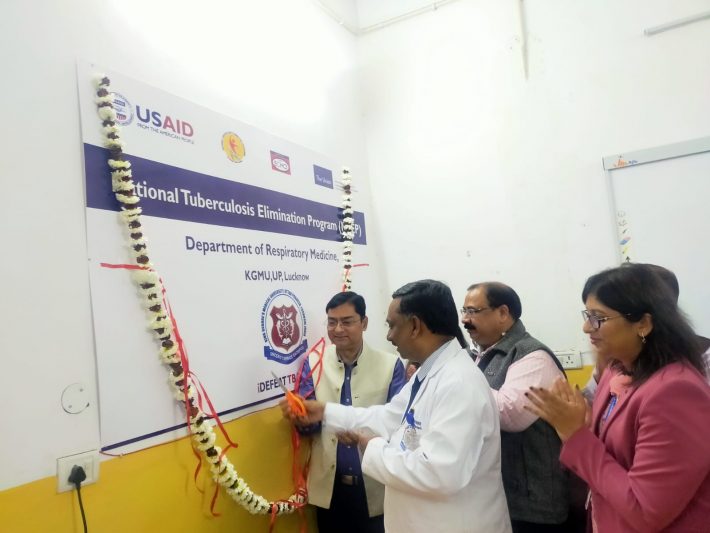 Lucknow: iDEFEATTB Project [Institutional Strengthening to Accelerate Actions for Tuberculosis (TB) and Drug Resistant TB (DR-TB) in India]is launched across the country and KGMU’s Department of Respiratory Medicine became the first “Center of Excellence” in Uttar Pradesh. On this occasion, Dr. Surya Kant informed that the Department of Respiratory Medicine is celebrating 75th year of its establishment, it is a matter of pride for the department that it has been selected among15 “Centers of Excellence” in the country. Additionally, it is the first and only centre in Uttar Pradesh. The chief guest of this program was the Chief Medical Superintendent of KGMU, Prof. S. N.Shankhwar congratulatedDr. Surya Kant and all the staff of the department on the occasion of the start of this program. Dr.Shankhwar said that T.B. Elimination is the dream project of our Prime Minister, and this project will give further strengthen to this campaign. KGMU Vice-Chancellor, Lt Gen (Dr.) BipinPuri said that KGMU is fully dedicated for eradication of TB   and assured to provide full co-operation and guidance to all the medical colleges of 75 districts of the state.

Dr. Surya Kant told that T.B. Project ECHO (Extension for Community Health Outcomes) globally works for the betterment of the TB patients. To eradicate drug resistant tuberculosis, all 62 medical colleges of Uttar Pradesh and all 75 districts of Uttar Pradesh will be sensitized towards TB; as well as experts and T.B. Related health workers will be trained online. Apart from this, seminars will be organized on new topics and research will be carried out. This “Center of Excellence” has been started in collaboration with two international organizations of the world – International Union Against Tuberculosis and Lung Disease (UNION) and United States of Agency for International Development (USAID) and Ministry of Health and Family Welfare, Government of India. It is to be known that Dr. Surya Kant who is also the Chairman of the U.P. State Task Force (TB elimination) from the last several years. He is providing leadership in the state as well as in the country in TB elimination. Dr. Surya Kant informed that Dr.JyotiBajpai, Assistant Professor, Department of Respiratory Medicine has been appointed as the Nodal Officer of TB Project ECHO of “Center of Excellence”.

Dr. Surya Kant told that world’s every fourth TB patient is Indian. Approximately TB kills 1.4 million every year in the world and of these, more than a quarter of the deaths occur in India, alone. Estimates suggest that there is about 9.1/1 lakh patients of drug resistant tuberculosis in India. Our Prime Minister has promised to END TB by 2025. Much progress has been made in the treatment of TB in the past few years. In ancient time, TB treatment takes up to two years, but now with the advent of new drugs such as bedaquiline and delamanid, the patient can be treated in less than a year. In the last few years M.D.R. TB patients have got freedom from the injection treatment, now they are treated with oral pills. Dr. Surya Kant ascribed that various works being done by the department towards TB eradication like- adaptation of 52 children suffering from the disease from the village ArjunPur and slum-area ofAisbagh, Lucknow.

On this occasion State T.B. Officer Dr.Santosh Gupta said that this center will help in the field of eradication of drug resistant tuberculosis and TB from our state. The program was conducted by Dr.JyotiBajpai, Assistant Professor, Department of Respiratory Medicine. On this occasion, WHO Consultant- Dr. Aparna and faculty members of Respiratory Medicine,K.G.M.U.-Dr. R A S Kushwaha, Dr.Santosh Kumar, Dr. Rajeev Garg, Dr. Ajay Kumar Verma, Dr.Anand Srivastava, Dr. Darshan Bajaj, Resident Doctors, all health workers of DOTS Center, and all the staff of  department attended.

Leading luminaries at UP PHDCCI dabble upon a greener tomorrow