Earlier the first release of ‘Raj Kapoor: The Master at Work’ was done by Vice President of India M. Venkaiah Naidu in New Delhi on the occasion of 97th birth anniversary of Raj Kapoor. During the book launch, the Vice President M. Venkaiah Naidu said that the aim of good cinema is not just entertainment. He urged the filmmakers to make such films which inculcate the spirit of morality, virtue, patriotism and humanity among the youth. Addressing a gathering in New Delhi after releasing the book ‘Raj Kapoor: The Master at Work’ authored by noted filmmaker Rahul Rawail, the Vice President emphasized that cinema should be a vehicle with a higher purpose. And inspire our youth to fight social evils like casteism, corruption, gender discrimination and criminality. Naidu said that it is the responsibility of the politicians, media and film makers to maintain the standards and keep in mind the larger interests of the people in view of the declining values ​​in every walk of life. He also condemned the glorification of violence and the use of vulgarity and sloppiness in films as it negatively affects the young mind. He said that cinema should create a positive feeling in the minds of the people, especially the youth. He also advised the filmmakers to make cinema with passion keeping in mind the national interest.

Law Minister Brajesh Pathak said that he has seen very few films. It has a movie ‘Mera Naam Joker’. When we were returning after watching the film, we had tears in our eyes. I know this much that without Raj Kapoor, there can be no talk of films.

Pathak congratulated Rahul Rawail and the book’s co-writer Pranika Sharma for bringing to the fore this extraordinary biography of the legendary filmmaker Raj Kapoor, who is regarded as the greatest showman of Hindi cinema. Describing Raj Kapoor as a visionary, talented and versatile actor, Pathak said that his contribution to the Indian film industry is incomparable. He said that most of Raj Kapoor’s films gave an important life lesson, which is depicted with great subtlety and eccentricity. I really miss the cinema of that era. Praising Raj Kapoor as a team-builder with exceptional ability, Mr Pathak said that he had a unique skill to uncover the hidden talent in actors, musicians, writers and lyricists.

Recalling maestro Raj Kapoor, Rahul Rawail said about this that where I am today is because of him. My book has many accounts and anecdotes from his life, which reveal his witty nature, insider talk, his relationships with his film crew, his tremendous passion for food and love. Raj Kapoor was the best teacher in the world. I will never forget the wonderful things I have learned from him.

The author of the book, Rahul Rawail, said that my film journey started with Raj Kapoor sahab. I worked with him. Later worked with Randhir Kapoor aka Dabboo ji. Then I started making films independently but whenever I got time, I used to go to work with Raj Sahab. He was my teacher. Till today I have never sat on a chair in front of him. Whenever I was on set, I used to sit on the ground next to his chair. Although many books have been written on Raj Kapoor sahib but this book is about his creativity and film craft. When I thought of writing this, I first talked to Randhir Kapoor and then to Rishi Kapoor. After that when I talked to Krishna ji, he said Rahul, you should write this book. You have worked with him a lot. The best one can write about his work is you. Then I started writing it and it took four years to complete it.

Raj Kapoor’s son and film actor Randhir Kapoor said that father used to think only about films all the time. According to Randhir, my father was a mother. He was a master story teller. Many books have been written on his legacy, but this book by Rahul Rawail is special. He said Chintu i.e. Rishi Kapoor and Rahul Rawail were very special friends. Had he been alive today, Rishi Kapoor would have been releasing it instead of me. Now it is my duty to fulfill his dream. He also told about the film ‘Hina’ that when this film was being made, only then his father had passed away. He never used to write scripts. Everything was on his mind. When he passed away, my brother and I thought of making it but we had nothing. There were just small pieces, with which my team started making the film. Even though this film was a hit but it did not turn out as Raj Kapoor ji wanted to make. I used to go on sets with him, so I had some idea. They did not even know Zeba Bakhtiyar. I brought him later from Pakistan. I didn’t even know where to use this song and the biggest problem was I couldn’t even remove his songs, otherwise people would say you are so big that Raj Kapoor’s song was removed. Somehow used a song, while one song was postponed saying that Raj Kapoor was not going to use this song at all.

Mukesh Singh, Executive Council Member of Indo American Chamber of Commerce and Chairman of Lucknow Chapter said that Kapoor family is the cornerstone of Bollywood. This book is based on the personality and work of Raj Kapoor, the first showman of the film industry. The book narrates how, from the lessons he learned under Raj Kapoor’s tutelage, Rahul Rawail directed his own blockbusters including Love Story, Betaab, Arjun and Dacoit. ‘Raj Kapoor: The Master at Work’, with his understanding of the human emotion, the virtues of music and the art of visual storytelling, offers Raj Kapoor a unique insight into how to become an exceptional filmmaker. Within these pages is seen behind the puzzle that lives and breathes in cinema, in his previously seen role as a teacher, mentor, parent and mentor. On this occasion, Singh urged the filmmakers and directors to come to Uttar Pradesh and produce more and more films here. Every effort will be made to get the full benefit of the policy made by the state government for the promotion of films to the filmmakers. Production of films in Uttar Pradesh will create employment opportunities at the local level, while budding talent will get a medium to work in films. Uttar Pradesh is a state rich in natural and cultural heritage, where there are many such world famous places, which can be used in films.

I aim to do roles that bring out the best in me: Nikki Tamboli 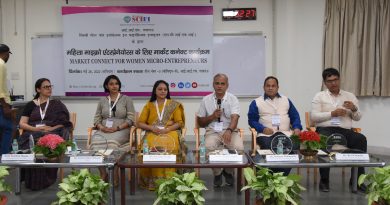