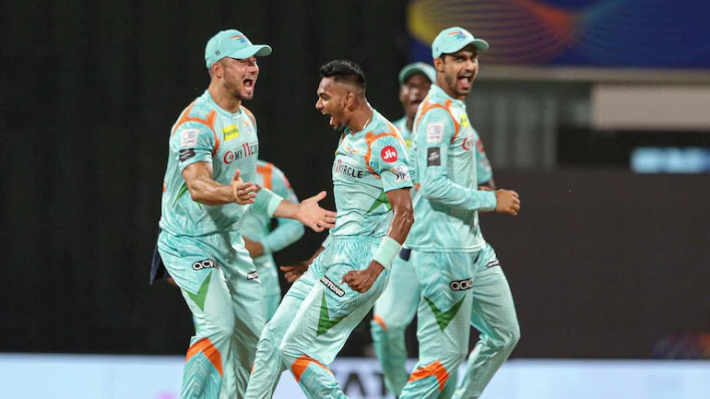 Lucknow: In the IPL, the team of Lucknow Super Giants defeated KKR and achieved the first position in the points table. To win the match, Kolkata’s team had to score 177 runs, but the entire team was bundled out for just 101 runs.

It would not be wrong to say that when they lost three wickets for just 25 runs in the power-play, the picture of the match was cleared to a large extent.

A big partnership was needed from here, which did not happen.

Most informed batsmen Rinku Singh and Nitish Rana were also flops. Later, Andre Russell scored 45 runs in 19 balls, but he was fighting a losing battle.

And they entertained the audience to some extent, but when Russell was out, it did not take much time for KKR’s innings to be reduced and the entire team was bundled out for 101 runs in 14.3 overs.

And he had to face badly by 75 runs. Holder and Avesh took three wickets each.

In the first innings, Lucknow, batting first, set a target of 177 runs to win in front of KKR. Lucknow had a poor start when captain KL Rahul was run out in the very first over, but from here second openers Quinton de Kock (50) and Deepak Hooda (41) put on a good base adding a crucial 71 runs for the second wicket.

Krunal Pandya (25) also tried to make a useful contribution, but despite this, Lucknow looked to score low, but in the slog overs, Marcus Stoinis (28) and Jason Holder (13) made some big strikes to give Lucknow the quota. Reached the score of 176 for 7 wickets in 20 overs.

On Birthday, wishes pour in for PM Modi

With six phase polls done, it all boils down to 54 seats in round 7 for Uttar Pradesh