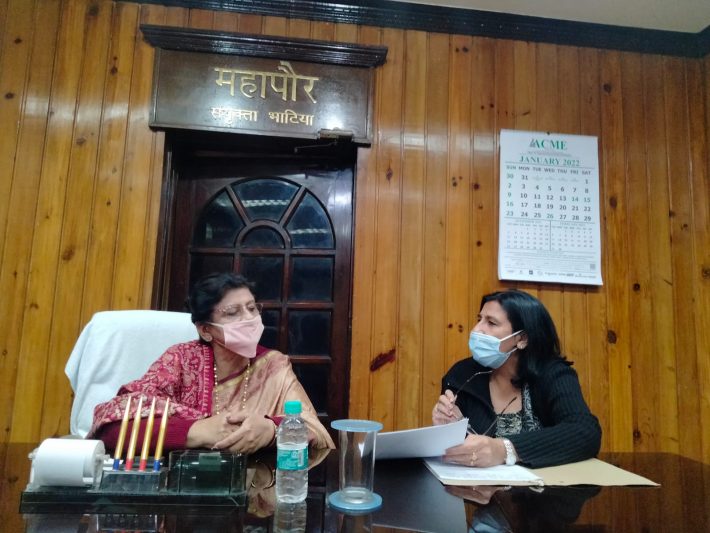 Lucknow: She was the runner-up from Lucknow in the mayoral election, Meera Vardhan, a candidate of Samajwadi Party, reached the municipal headquarters at Lalbagh to meet Mayor Sanyukta Bhatia. The mayor gave her a warm welcome.

Mayor Sanyukta Bhatia made Meera Vardhan seated with a chair next to her and after listening to her seriously, directed Municipal Commissioner Ajay Dwivedi and Chief Assessing Officer Ashok Singh to get the problem resolved.

Meera told the mayor that she had received information through the newspaper that Lucknow University Road has been renamed after KD Singh in the executive meeting on December 29, whereas this road was earlier named after Acharya Narendra Dev. Meera Vardhan also showed the mayor the photo of the stone plate installed on the road and also displayed the documents of naming in the past. On which the Mayor called Municipal Commissioner Ajay Dwivedi to her room and called Chief Assessing Officer Ashok Singh and discussed, as well as investigated the matter and summoned the report.

The Mayor told Meera Vardhan that if any road has been named after a great man in the past, then its name will not be changed and assured that the name of the said road will remain ‘Acharya Narendra Dev Marg’.

Colours of Holi back to Ayodhya’s Ram Mandir

Will Vandana’s blind trust on Internet findings create a problem in The Wagle Family?