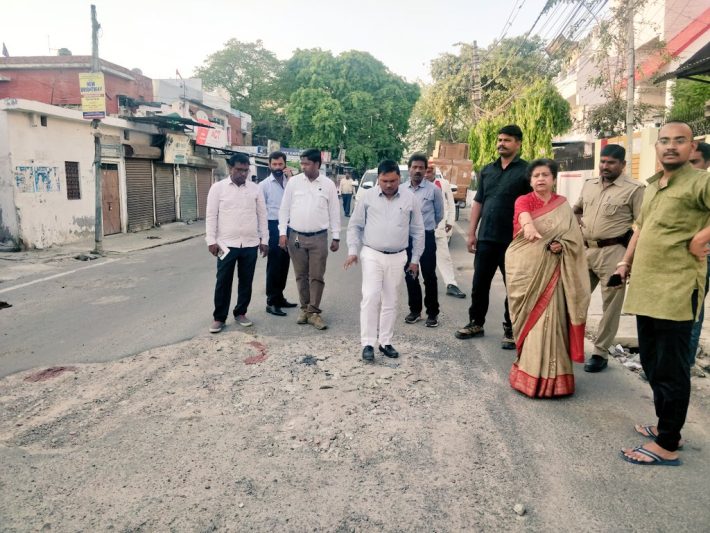 Lucknow Mayor reached the spot, reprimanded the general manager of the Jal Nigam for not repairing the road cut by the water corporation 1 month ago

The Jal Nigam was caught on the wrong foot when a band of local residents complained to the Lucknow Mayor Sanyukta Bhatia that  the road dug 1 month ago to fix the pipe by the water corporation was not set back to its original form by the water corporation.  Mayor Sanyukta Bhatia herself reached the spot along with the Municipal Corporation officials. Reprimanding the General Manager Jalnigam, she directed to get the road repaired immediately, and also directed to take action against the concerned engineer for not repairing the excavated road for 1 month.

Along with this, Mayor Sanyukta Bhatia also expressed displeasure to the General Manager Jalnigam on other roads cut in the city, and directed the Municipal Corporation to cut the road and repair it in 7 days only after informing . She also asked for action against the guilty engineers and working organizations for non-working roads.

It may be noted that on the instructions of the Mayor, a good quality road was constructed in the month of December with the funds of the 15th Finance Commission. Which was cut by Jal Nigam 1 month ago due to pipeline repair and was left without repair. Due to the passage of more than 1 month without repair, the public also has to face a lot of inconvenience, the public also has the belief that the road built by the Municipal Corporation broke down quickly. Along with this, due to an old mandate, there is a provision to repair the roads cut in the city by the water corporation through the water corporation itself, due to which the common man has to face problems and the grievances of the public have to be heard by the municipal corporation.

On this occasion, Mayor Sanyukta Bhatia along with Chief Engineer Mahesh Verma, Executive Engineer Sudhir Kannojia, Abhay Sonkar and other officials were present.