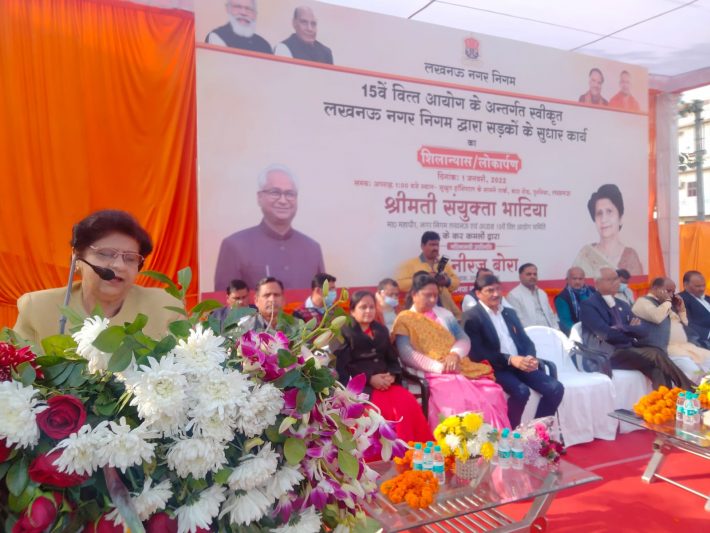 Lucknow: Mayor Sanyukta Bhatia dedicated 91 development works worth Rs 19.07 crore to Sarojininagar assembly constituency on the auspicious occasion of New Year 2022 and 78 development projects worth Rs 12.20 crore to North Vidhan Sabha. The Mayor  gifted 169 development projects worth a total of 31.27 crores to the residents of the city. The above works were inaugurated and the foundation stone was laid by the Mayor along with the local public representatives in the said assembly.

In front of Sushruti Hospital on Bandha Road, the development projects were inaugurated by Mayor Sanyukta Bhatia along with local MLA Neeraj Bora along with councilors.

On this occasion, Mayor Sanyukta Bhatia said that in the last four years, Lucknow Municipal Corporation has set many records of development along with the basic needs of the people of Lucknow. Lucknow is moving towards a clean, beautiful and safe Lucknow. We have established many dimensions in cleanliness. Beautiful phulwari has been developed by eliminating 120 open garbage dumps on the road, garbage has been removed from 10 thousand vacant plots. The cleanliness rating of Lucknow has jumped from 269 to 12th position. In the last 4 years, development works worth about Rs 24 billion have been done by the Municipal Corporation across the city.

About 1000 parks were developed, fountains were installed at 36 places, the city was beautified by installing strip lights on 46 thousand polos. Under the leadership of Hon’ble Chief Minister, a sense of security has arisen in the entire Uttar Pradesh as well as the people of the city. The Municipal Corporation has installed 2 lakh 10 thousand LED lights in the city. Continuous monitoring is being done by Smart City by installing cameras from place to place, we can say that the city is in safe hands. Honorable Mayor further said that under the leadership of Modi ji Yogi ji, the Ganga of development is flowing in the country and in the state. Working under his able leadership, in the last four years, the Municipal Corporation has set a new record of development in the city of Lucknow. Be it the country, the state or the city of Lucknow, the triple engine government has done as much development work in the last 70 years. I haven’t been able to either.