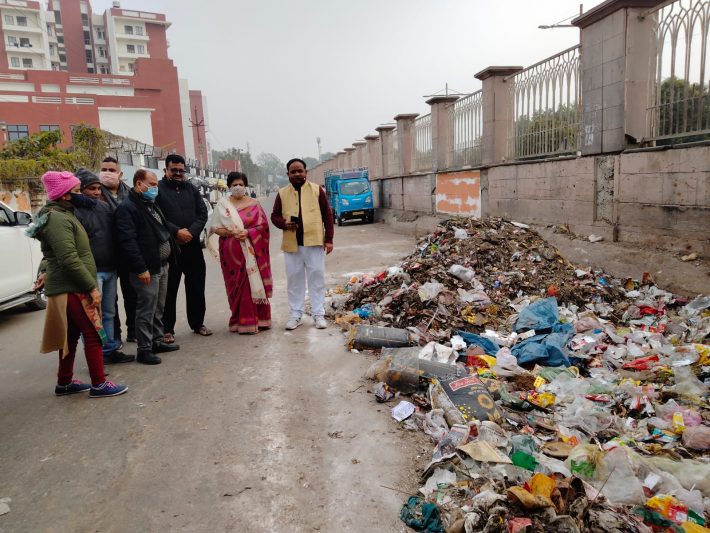 Lucknow: Mayor Sanyukta Bhatia inspected 11 dumping points of Alambagh area and directed the officials of Ecogreen and Municipal Corporation to improve the system for cleanliness survey and cleanliness and garbage collection in the city.

During this, the officials told the mayor that after the instructions of the mayor, the culvert and the garbage dump located at the Home Guard Headquarters have been abolished. At the same time, the mayor expressed displeasure over the failure of one of the two compactors installed at Awadh intersection and the officials of Ecogreen were instructed to fix it.

Along with this, the mayor directed the sanitation workers posted near the dumper to do regular cleaning and apply lime bleaching etc. so that diseases do not spread.

Instructions were given by the mayor to dismantle the garbage dump located at Sabzi Mandi in Kailashpuri, the mayor was also asked to install a compactor there. Along with this, the garbage located near the Gaushala was also directed to be dismantled.

The Municipal Corporation officials were also directed by the Mayor to carry out permanent garbage collection and to clean the place by getting a broom after picking up the garbage.

During this, displeasure was expressed over the presence of stray animals at the garbage dumps located in Kanausi, Kailashpuri and Anand Nagar and Chief Veterinary Officer Dr. Arvind Rao was instructed to capture all the animals and take them to Kanha Park during the campaign. Caught from various garbage dumps and detained in Kanha Upvan.

On this occasion, along with Mayor Sanyukta Bhatia, Zonal Officer Subhash Tripathi, Ecogreen’s Zonal Manager Rahul Gupta along with cleanliness inspection of the respective wards were present.