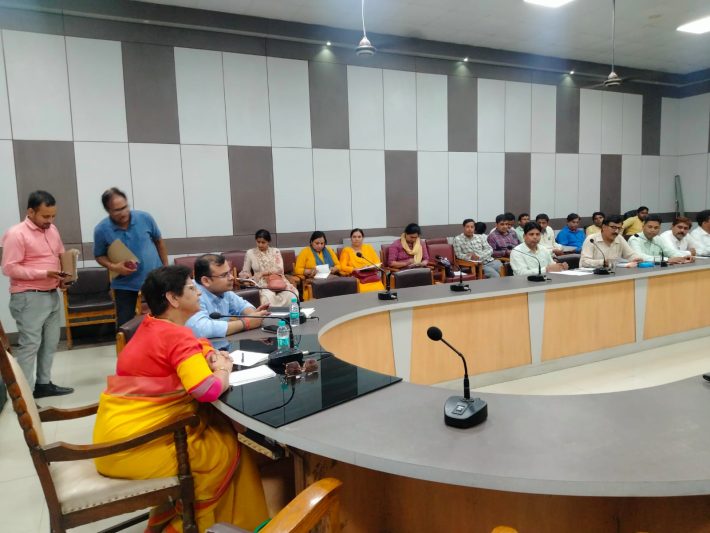 Lucknow:  Mayor Sanyukta Bhatia, in view of the upcoming monsoon and in order to strengthen the cleanliness system, held a meeting of all the Zonal Sanitary Officers and cleanliness and food inspection personnel and instructed them to improve the system and clean all the small drains  by running a campaign till 25.

Mayor Sanyukta Bhatia expressed displeasure over the choked drains being found in the daily inspection being done by her. For this, the Mayor directed that a special cleaning campaign would be conducted for drain cleaning till 25th date, in which a special campaign of cleaning drains would be conducted in all the wards of all the zones and silt would be removed.

After that, random basis checking of drains and drain cleaning will also be done. A digital diary of cleaning of all drains will also be made under the 3-day campaign. Along with this, the debris lying in all the localities of all the wards will be picked up during this period.

The Mayor gave strict instructions in the meeting that if the employees of the executive organization are found less in the wards, then it will be the responsibility of the SFI and ZSO and action will be taken against them along with the executive organization. It is the responsibility of these officers that all the employees in the ward should work full time. The mayor said that if anyone pressurizes us, then complain to us, I will take action on that too.

During this, Additional Municipal Commissioner Abhay Pandey said that all ZSOs should ensure cleaning of drains till 25, if after that there is waterlogging due to non-cleaning of drains, then ZSOs will be responsible.

During the inspection of the Mayor, the disturbances of the employees are being continuously caught, for this the Mayor, showing strictness, instructed Additional Municipal Commissioner Abhay Pandey to make I-cards of all the cleaning workers. The employee’s phone number, name, attested photo, Aadhar card, name of the working organization, ward name etc. will be prominently mentioned in the icard.

Mayor Sanyukta Bhatia along with Additional Municipal Commissioner Abhay Pandey, City Health Officer Dr Sunil Rawat along with ZSOs and SFIs of all the zones were present in the meeting.