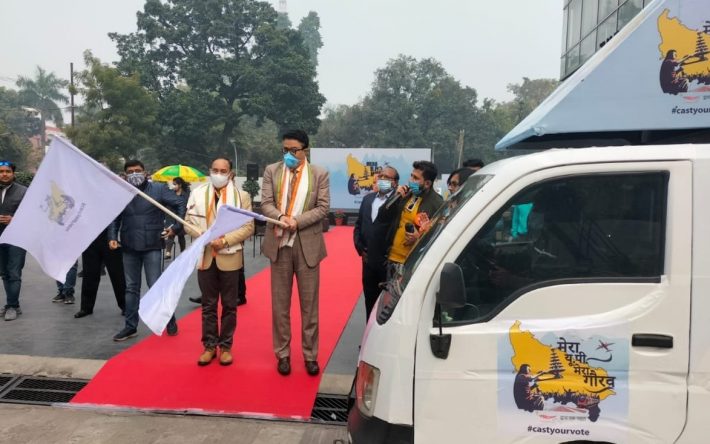 Lucknow: Mirchi 98.3 FM flagged off “Mera UP, Mera Gaurav” , as the state inched closer to the upcoming elections. Additional Chief-Secretary (Information and Broadcasting)  Navneet Sehgal graced the event as its chief guest. He was accompanied by other distinguished guests like the honourable Chief Minister’s OSD, Doctor Rahees Singh.

RJ Prateek started the program on behalf of Mirchi 98.3.  Navneet Sehgal and Doctor Rahees Singh were welcomed with bouquets and shawls. It was then RJ Prateek’s turn to strike conversations with the assembled audience. He also appealed to the residents of Uttar Pradesh to cast their votes in large numbers.

Outlining the thought behind this program, Aftab Alam, Content head, UP&Bihar said, “The aim of this activity is to spread the feeling of pride amongst the people of our beloved state. It is that love and pride that will make people realize and understand their duties towards the state and I am sure they will fulfil it by casting their votes. This initiative will run parallelly on radio, digital platforms, and through on-ground activities.”

The Program’s chief-guest and Additional Chief Secretary (Information and Broadcasting) Navneet Sehgal, heartily appreciated Radio Mirchi’s efforts, and said that while the administration took several measures to increase voters’ turnouts in elections, such an activity, conducted by another organization, was the first of its kind. He asked the people of Uttar Pradesh to be very proud of their state and appealed to them to cast their votes. He also thanked Radio Mirchi and The Times of India Group for this initiative. The program’s special guest and the honourable Chief Minister’s OSD Mister Rahees Singh commented that it was the duty of every citizen above the age of 18 to cast their vote and realize their powers and responsibilities.

Astro Expert’s Take On Week Ahead: January 24 to January 30