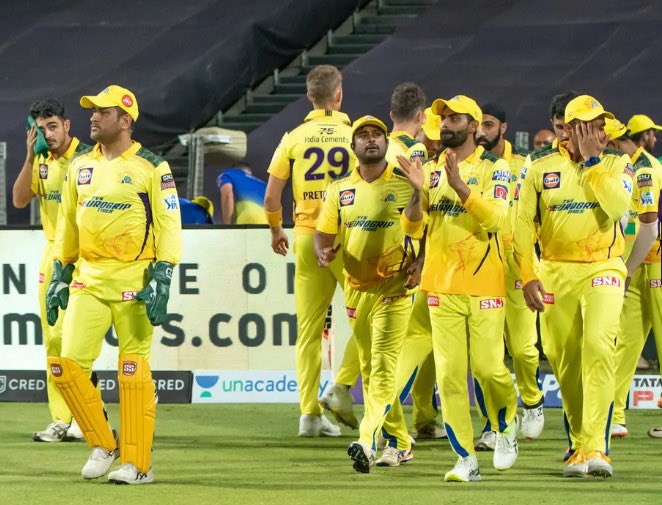 Mumbai: The 46th match of IPL 2022 went in favour of Chennai Super Kings. Chennai Super Kings achieved a 13-run victory against Sunrisers Hyderabad. With the win, Chennai also avenged the previous defeat from Hyderabad. Hyderabad had defeated them by eight wickets in the first encounter of this season. This was Chennai’s first and third overall win of the season under Dhoni’s captaincy.

Mahendra Singh Dhoni took charge of Chennai (CSK) for the first time in the season in the match played at the MCA Stadium in Pune on Sunday. Under his leadership, the team successfully defended the score of 202 runs and restricted Hyderabad (SRH) to 189. For Chennai, Rituraj Gaikwad and Devon Conway played half-centuries, while Mukesh Chaudhary took four wickets in the bowling.

Sunrisers Hyderabad started chasing Chennai’s target of 203 runs. Abhishek Sharma and Kane Williamson together took the team’s score beyond 50 in five overs. But on the fifth and sixth balls of the sixth over, Mukesh Choudhary added to Hyderabad’s troubles by dismissing Abhishek Sharma and Rahul Tripathi. Aidan Markram and Kane Williamson then tried to handle the innings and scored fast but Markram also returned to the pavilion in the 10th over.

Williamson kept up the form from the other end and kept on increasing the score but that too kept on going on the score of 47. After this, Nicholas Pooran and Shashank Singh took the lead and started taking the innings forward. But Mukesh Chaudhary again pushed Hyderabad on the back foot in his second spell. He dismissed both Shashank and Sundar in the 18th over.

Pooran scored a quick run and completed his fifty in 29 balls. Pooran scored 24 runs in the last over but that was not enough for the team to win. Nicholas Pooran scored the highest run for Hyderabad and remained unbeaten on 64 runs in 33 balls. While for Chennai, Mukesh Chaudhary took the maximum four wickets.

Hyderabad captain Kane Williamson won the toss earlier and called Chennai to bat. Chennai made a strong start proving Hyderabad’s decision wrong. Rituraj Gaikwad and Devon Conway, playing the second match of the season, shared a 182-run partnership for the first wicket. Rituraj, however, missed his century and was dismissed for 99 runs in 57 balls. While Conway remained unbeaten on 85 off 55 balls. Natarajan took two wickets for Hyderabad.

So what really fuels the mutiny of the Anndaata on the street?