Mumbai: India’s largest AVOD OTT platform, MX Player, picked up three awards at the recently held Dadasaheb Phalke Excellence Awards 2022 for the platform and its Original Series, Aashram. While MX Player was awarded the Best OTT Platform, Prakash Jha was awarded the Best Director for web-series, Aashram and Chandan Roy Sanyal was given the Best Supporting Actor Award for his portrayal as Bhopa Swami in Aashram.

Dedicated to the Father of Indian Cinema, the Dadasaheb Phalke Excellence Awards is given to the entertainment industry every year to recognise outstanding contributions in different categories. Celebrating the 151th Anniversary year of Dadasaheb Phalke this year, the 18th edition of the Awards ceremony held in Mumbai had reputed producers, directors, actors, writers, musicians, technicians, distributors, exhibitors and studio owners from OTT, TV and Films grace the event and be recognised for their work.

Operating on an ad-supported model, MX Player has a large and diverse audience base in India and a global reach of 33+ markets and a keen understanding of the pulse of the audience. It has recently launched several record-breaking web-series like Aashram, BhaukaalMatsyaKaand, Samantar, High and Campus Diaries. MX Player is the only OTT platform to deploy H.266 technology that cuts down video streaming data consumption into half. According to the App Annie State of Mobile Report -2022, in terms of the Downloads in Video Streaming, MX Player ranks #2 in Indian and #6 Worldwide.

MX Player’s Chief Operating Officer (COO), Nikhil Gandhi said “At MX Player, we believe that relevant and strong narratives have the ability to provoke thought and entertain audiences at the same time. Winning the Best OTT Platform and winning two more awards for our successful series, Aashram reaffirms our belief. Thank you, Dadsaheb Phalke Excellence Awards 2022, for the honour in recognising our work in bringing hugely appreciated stories for our audiences in India, and across the world. Our congratulations to Prakash Jha and Chandan Roy Sanyal on their respective wins too.”

The Best Director’s Award was received by Sunil Agarwal, CEO, Prakash Jha Productions (PJP), Madhvi Bhatt, Creative Head, PJP and Disha Jha, Producer, PJP. On winning the Dadasaheb Phalke Excellence Awards 2022 Best Director for the series, Aashram, Prakash Jha said, “I feel truly honored to be given Dadasaheb Phalke Excellence Awards 2022 for Best Director for Web series Aashram. It was indeed a pleasure working with the team of MX Player who supported us throughout all our decisions. Unfortunately, I cannot personally come and receive it due to unavoidable reasons. I would like to thank the Jury for considering me and giving me this award.”

Chandan Roy Sanyal won the Dadasaheb Phalke Excellence Awards 2022 Best Actor in Supporting Role for the series, Aashram. On receiving the award, Chandan said, “This is my first award ever, and it is because of all your support and blessings of our Father of Indian Cinema, Dadasaheb Phalke, that today I am standing here in front of you all. It is such a great feeling to receive an award like this. I would like to thank the team of MX Player, our director Prakash Jha Sir, Bobby Deol, and the entire team present here today who believed in me and showered me with their blessings and love.” 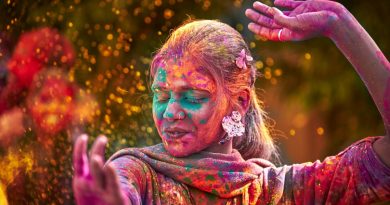 This Holi know how your Zodiac signs rule how you celebrate the festival ?