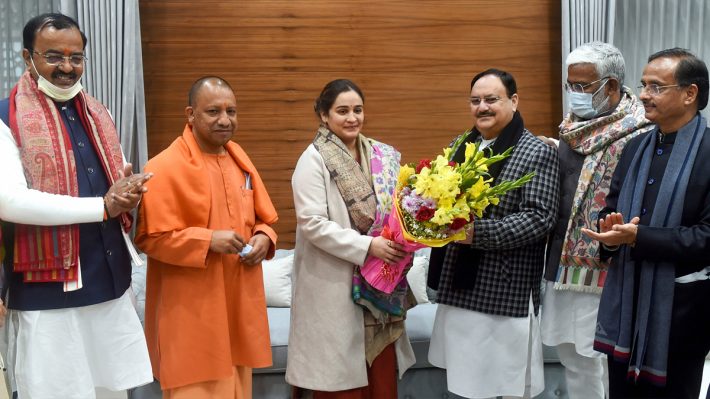 Lucknow: Days after Swami Prasad Maurya split from the BJP and shifted to Samajwadi Party, in an interesting turn of events, Mulayam Singh Yadav’s daughter in law Aparna Yadav has now decided to camp in the BJP.  With this shrewd move the Bharatiya Janata Party has made a big dent in the Samajwadi family. Coincidentally the same day, NDA allies in Delhi gave a message of unity by holding a joint press conference. This move of Aparna Yadav is not surprising.

She has been openly praising the work of BJP, Prime Minister Narendra Modi and Uttar Pradesh Chief Minister Yogi Adityanath for the past several years. SP President Akhilesh Yadav also congratulated her and made it clear that he was not surprised by Aparna’s move and had an idea that she could take the BJP’s path. In fact, Aparna Yadav had contested from Lucknow’s Cantt assembly seat in 2017 on a Samajwadi Party ticket, but she had to face defeat. After this, she did not get much attention in SP. Seen as someone who is politically very ambitious and wanted to actively contribute to the party, it is believed she could not find her place in the Samajwadi Party. On the family front, Aparna, wife of Prateek Yadav, son of Mulayam Singh Yadav and his second wife Sadhna Gupta, remained isolated in the ‘Yadav family’.

No Cooling of Nerves

Despite attempts to bury the hatchet for 5 years, incidentally all attempts fell flat. Seeing the family disputes not getting resolved in five years, Aparna thought it appropriate to take a different path. Aparna has no mass base nor is she an established leader, so her departure is not going to have much impact on the Samajwadi Party. It also has to be seen whether Aparna keeps her neglect in the ‘Yadav family’ in front of the public in the election campaign etc. or not. By bringing Aparna into the BJP, the party has definitely put a pressure on the SP.

The BJP was on the back foot after OBC leader Swami Prasad Maurya and two other ministers, who were ministers for five years in the BJP government, joined the Samajwadi Party. OBC leaders of all the districts have become active under the leadership of Swami Prasad Maurya, who recently joined the SP. To control this damage, a joint press conference of NDA allies gave a message of solidarity. Other backward leaders of NDA, including Anupriya Patel, tried to tell that the backward leaders who went to SP are opportunists and after being in government for five years, they switched sides after seeing the opportunity.

Meanwhile on the Other Side

BJP national president J. P. Nadda said that we have an agreement with Nishad Party and Apna Dal in UP and we will fight together on 403 seats. Nadda’s press conference emphasized an electoral tie-up with the Apna Dal and the Nishad Samaj Party, already part of the NDA alliance. In what is very apparent, BJP wants to counter OBC politics of SP by giving more tickets to these two parties by reducing their risk a bit. Nishad Samaj Party and Apna Dal will give more tickets to OBCs and Dalits. OBC politics has been fuelled further by the departure of Swami Prasad Maurya, Dara Singh Chauhan, Dharam Singh Saini.

The BJP Core Committee meeting which lasted for two days proved that BJP has now handed over the reins of UP to Deputy CM Keshav Prasad Maurya in a way. He is taking or involved in all the decisions. Chief Minister Yogi is especially not being included in political decisions.

Talent surpasses age barriers; Shooter Dadi is the true inspiration of the country

Not Sita, this time Hanuman to fight for Swati’s honour 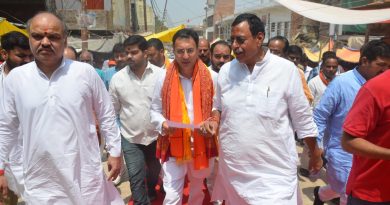 U.P PWD Minister inspects the progress of the Vindhya Corridor