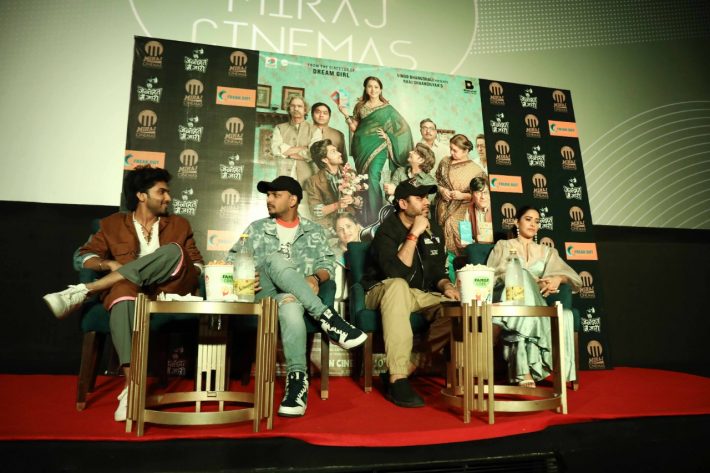 Indore: Nushrat Bharucha starrer ‘Janhit Mein Jari’ is just two days away from its worldwide release and in connection with the promotion of the same film, Nushrat, along with co-actor Anud Singh arrived in the city.

The cast visited Miraj Cinema, where they screened the trailer of ‘Janhit Mein Jari’ and also interacted with the Madhya Pradesh media in detail about the film. Apart from this, during the shooting, interesting things behind the scenes came to the fore and also discussed about the message from the film, which needs to reach every nook and corner of the country.

Raaj Shaandilyaa and Vinod Bhanushali are all set to bring you the new age comedy drama ‘Janhit Mein Jari’, directed by Jai Basantu Singh. This movie promises to tickle you as well as open your brain.

Shaandilyaa’s trademark humor ‘Continuing in Public Interest’ covers the funny journey of a young girl who, despite social resistance, sells condoms for her sustenance, and decides to teach an important lesson to her family, in-laws and society. does.

Produced by Bhanushali Studios Limited and Think Ink Pictures Production, the film is co-produced by Shree Raghav Entertainment LLP. Directed by Jai Basantu, the film is a Zee Studios release and is slated to hit the theaters on June 10.